Do chimpanzees have a theory of mind? 30 years later

Call and Tomasello offer a review in the May issue of Trends in Neuroscience on the controversial question of how much our nearest relatives understand about the minds of others:

Here is one description of an experimen showing that Chimpanzees infer a human's intentions: 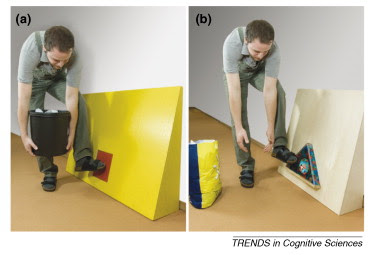 Buttelmann et al. [Dev. Sci. 10 (2007 pp. F31–F38]...tested six human-raised chimpanzees in the so-called rational-imitation paradigm. The chimpanzees were shown how to operate an apparatus to produce an interesting result (e.g. lights or sounds), and then they were given a turn. The most natural behavior for them in all cases was to operate it with their hands. But this obvious behavior was never demonstrated for them; they always saw a human manipulate the apparatus in a novel way with some other body part. The idea was that in some cases the physical constraints of the situation dictated that the human (referred to as ‘E’ in the figure) had to use that unusual body part; for example, he had to turn on a light with his head because his hands were occupied holding a blanket or he had to operate a light with his foot because his hands were occupied with a heavy bucket (see Figure I). When the chimpanzees saw this forced use of the unusual body part, they mostly discounted it and used their hands as they normally would (because the constraints were not present for them). However, when they saw the human use the unusual body part when there was no physical constraint dictating this, they quite often copied the unusual behavioral means themselves. If we interpret this experiment the way it is interpreted for human infants, the conclusion is that the chimpanzees understood not only what the experimenter was trying to do (his goal) but also why he was doing it in the way he was doing it – the rationality behind the choice of the plan of action toward the goal. According to Tomasello et al. [Behav. Brain Sci. 28 (2005), pp. 675–691], an understanding of the action plan chosen toward a goal constitutes an understanding of the intention.

Posted by Deric Bownds at 5:00 AM
Email ThisBlogThis!Share to TwitterShare to FacebookShare to Pinterest
Blog Categories: animal behavior, mirror neurons, self