More on gay and straight brains.

A recent study notes that in several measures of brain symmetry, straight men and gay women were similar, and gay men and straight women were similar. MindHacks points out a further interesting feature: that amygdala reactivity to simply breathing unscented air (thus having nothing obvious to do with sexual preference or activity per se) is different in gay and straight men and women. This is yet more evidence that sexual preference is not determined solely by individual developmental experience. Here is the complete abstract of the Savic and Per Lindström article, followed by the PET scan amygdala data, which speaks for itself, and finally a clip from the discussion. PDF of article here.

Cerebral responses to putative pheromones and objects of sexual attraction were recently found to differ between homo- and heterosexual subjects. Although this observation may merely mirror perceptional differences, it raises the intriguingquestion as to whether certain sexually dimorphic features in the brain may differ between individuals of the same sex but different sexual orientation. We addressed this issue by studying hemispheric asymmetry and functional connectivity, two parameters that in previous publications have shown specific sex differences. Ninety subjects [25 heterosexual men (HeM) and women (HeW), and 20 homosexual men (HoM) and women (HoW)] were investigated with magnetic resonance volumetry of cerebral and cerebellar hemispheres. Fifty of them also participated in PET measurements of cerebral blood flow, used for analyses of functional connections from the right and left amygdalae. HeM and HoW showed a rightward cerebral asymmetry, whereas volumes of the cerebral hemispheres were symmetrical in HoM and HeW. No cerebellar asymmetries were found. Homosexual subjects also showed sex-atypical amygdala connections. In HoM, as in HeW, the connections were more widespread from the left amygdala; in HoW and HeM, on the other hand, from the right amygdala. Furthermore, in HoM and HeW the connections were primarily displayed with the contralateral amygdala and the anterior cingulate, in HeM and HoW with the caudate, putamen, and the prefrontal cortex. The present study shows sex-atypical cerebral asymmetry and functional connections in homosexual subjects. The results cannot be primarily ascribed to learned effects, and they suggest a linkage to neurobiological entities. 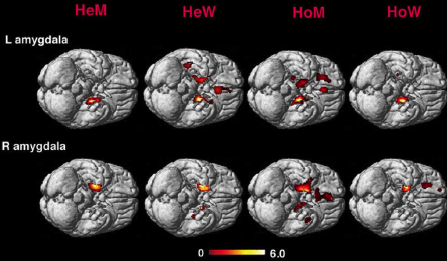 HeW and HoM displayed more pronounced between-amygdala connections and greater connections with the anterior cingulate, the subcallosum, and the hypothalamus. This connectivity pattern provides a strong substrate for processing of external stimuli that are relayed by the two amygdalae and represents a possible pathway for their functional interconnection in HeW and HoM. The remarkable similarity between HeW and HoM in the connectivity pattern deserves special attention. The amygdala has a key role in emotional reactions to external stimuli, including stress; the subcallosum and the anterior cingulate, on the other hand, are highly involved in mediation of mood and anxiety-related processes. Affective disorders are 2–3 times more common in women than men, and the tight functional connections between the amygdala and cingulate in women is currently discussed as a possible neurobiological substrate for their higher vulnerability, in addition to the effects of estrogen and testosterone. Interestingly, the incidence of depression and suicide attempts is elevated in homosexual subjects, and HoM in particular. Although the underlying mechanisms are likely to be multifactorial and include social pressure, the presently observed similarity with HeW vis-a`-vis the amygdala connectivity motivates further evaluations.

Posted by Deric Bownds at 5:30 AM
Email ThisBlogThis!Share to TwitterShare to FacebookShare to Pinterest
Blog Categories: psychology, sex