Can 'emergence' put spirituality back into nature? 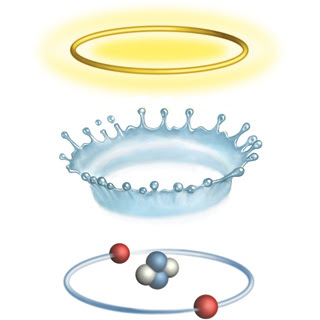 The anti-reductionist view of emergence undergoes cycles of popularity as a philosophical topic. Valerie Hardcastle gives a rather critical review (in Jour. Consciousness Studies, Vol. 14, No. 11, pp.119-122) of a recent collection "The Re-Emergence of Emergence - The Emergentist Hypothesis from Science to Religion" edited by Clayton and Davies (Oxford Univ. Press, 2006). This emergentism is 'feel good' stuff. I think most of us get a bit frightened and a bit dried and shriveled up at the implications of strong reductionism in which all the explanatory arrows point down. Reversing the reductionist’s causal arrow with a comprehensive theory of emergence and self-organization that breaks no laws of physics and yet cannot be explained by them is a laudable project, but as Hardcastle wryly notes, one that continues to fail the "where's the beef" test.

Michael Shermer offers a very appealing gloss in his "Skeptic" column in the Scientific American, with the title: Sacred Science - Can emergence break the spell of reductionism and put spirituality back into nature? He specifically reviews a new book by Stuart Kauffman, Reinventing the Sacred (Basic Books, 2008). Denis Noble also reviews Kauffman's book in Science Magazine. Here are some clips from Shermer's column:
Kaufman:

...reverses the reductionist’s causal arrow with a comprehensive theory of emergence and self-organization that Kaufman says “breaks no laws of physics” and yet cannot be explained by them. God “is our chosen name for the ceaseless creativity in the natural universe, biosphere and human cultures.” In Kauffman’s emergent universe, reductionism is not wrong so much as incomplete. It has done much of the heavy lifting in the history of science, but reductionism cannot explain a host of as yet unsolved mysteries, such as the origin of life, the biosphere, consciousness, evolution, ethics and economics... How would a reductionist explain the biosphere, for example? “One approach would be, following Newton, to write down the equations for the evolution of the biosphere and solve them. This cannot be done,” Kauffman avers. “We cannot say ahead of time what novel functionalities will arise in the biosphere. Thus we do not know what variables—lungs, wings, etc.—to put into our equations. The Newtonian scientific framework where we can prestate the variables, the laws among the variables, and the initial and boundary conditions, and then compute the forward behavior of the system, cannot help us predict future states of the biosphere.”... This problem is not merely an epistemological matter of computing power, Kauffman cautions; it is an ontological problem of different causes at different levels. Something wholly new emerges at these higher levels of complexity.

Similar ontological differences exist in the self-organized emergence of consciousness, morality and the economy...economics and evolution are complex adaptive systems that learn and grow as they evolve from simple to complex...they are autocatalytic, containing self-driving feedback loops...such phenomena “cannot be deduced from physics, have causal powers of their own, and therefore are emergent real entities in the universe.” This creative process of emergence, Kauffman contends, “is so stunning, so overwhelming, so worthy of awe, gratitude and respect, that it is God enough for many of us. God, a fully natural God, is the very creativity in the universe.”

God 2.0 is a deity worthy of worship. But I am skeptical that it will displace God 1.0, Yahweh, whose Bronze Age program has been running for 6,000 years on the software of our brains and culture.

Posted by Deric Bownds at 5:30 AM
Email ThisBlogThis!Share to TwitterShare to FacebookShare to Pinterest
Blog Categories: culture/politics, evolution/debate, technology