Neuroimaging shows use of self thoughts to infer others' mental states

Jenkins et al. offer a fascinating study of how we infer the mental states of others (mentalize), making use of a phenomenon (repetition suppression) that I had not been aware of before. Here I've done a cut/paste/edit from the abstract and article to try to outline the basic idea, and also show the central figure:

One useful strategy for inferring others' mental states (i.e., mentalizing) may be to use one's own thoughts, feelings, and desires as a proxy for those of other people (This approach to social cognition is alternately described as "simulationist," "projectionist," or "self-referential".) A dorsal aspect of the medial prefrontal cortex has been associated with mentalizing about people perceived to be dissimilar from oneself, whereas a more ventral aspect of medial prefrontal cortex (vMPFC) has been linked to mentalizing about those perceived to be similar. Critically, this vMPFC region also has been observed repeatedly during tasks that require participants to introspect about their own mental experiences, suggesting a connection between tasks that require self-referential thought and those that require inferences about the mental states of similar others.

Because such techniques integrate neural activity across hundreds of thousands of neurons, activation of the same brain voxel by different tasks might occur because each activates distinct, but neighboring or interdigitated, neuronal populations. In this way, two tasks could possibly coactivate the same brain voxel despite engaging different sets of neurons that subserve disparate cognitive processes.

This technical limit can now be circumvented by recently developed paradigms that support stronger conclusions regarding the coactivation of the same neurons by different stimuli or different tasks. These techniques rely on an effect known as "repetition suppression," the observation that neural activity in stimulus-sensitive brain regions is typically reduced when a stimulus is repeated

Suppression across two stimuli indicates that the same (or at least a largely overlapping) population of neurons is engaged by both stimuli. For example, a demonstration of repetition suppression for the number "3" when it follows "4" but not when it follows "40" might suggest that a relatively high proportion of the neurons that code for the number "3" also participate in representations of similar numerosities (such as "4"), but not in representations of more distant numerosities.

Consistent with this hypothesis this perceivers spontaneously engage in self-referential processing when mentalizing about particular individuals, vMPFC response was suppressed when self-reflections followed either an initial reflection about self or a judgment of a similar, but not a dissimilar, other. These results suggest that thinking about the mind of another person may rely importantly on reference to one's own mental characteristics.

Here is the basic figure: 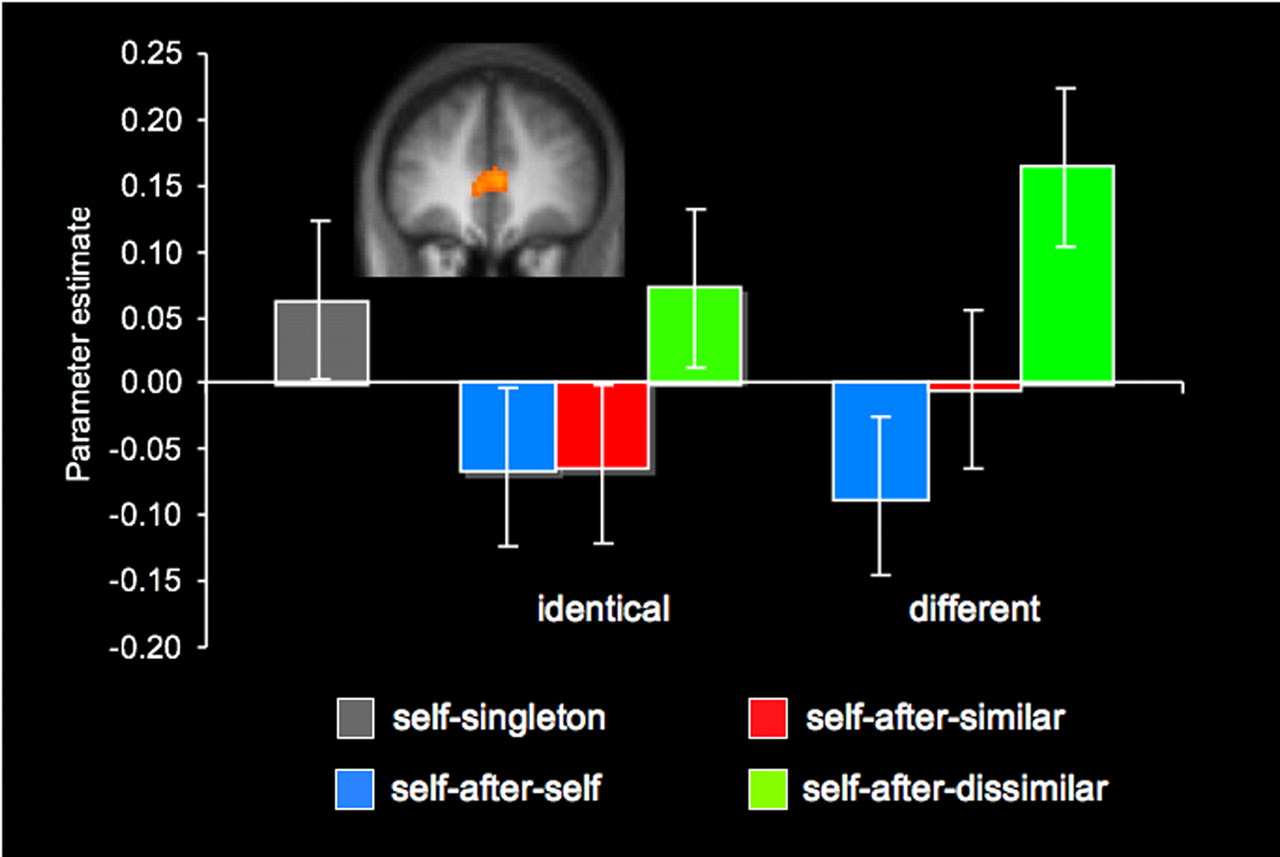 Figure legend (click on figure to enlarge it). A region of vMPFC (–6, 45, 3; 47 voxels in extent) was defined from an explicit self-reference task in which judgments of one's own personality characteristics were compared with judgments of another person (i.e., self > other). On a separate task, participants completed a series of paired judgments, in which they introspected about their own preferences and opinions immediately after one of three types of judgments: (i) an initial report about self (self-after-self), (ii) a judgment of a person with the same sociopolitical attitudes as oneself (self-after-similar), or (iii) a judgment of a person with opposing attitudes (self-after-dissimilar). On an equal number of trials, participants considered the identical question for prime and self or a different question across the two phases. The bar graph depicts the BOLD response associated with these self-reports after subtracting out the response associated with the initial judgment (see Methods); values therefore represent the additional BOLD response specifically associated with subsequent judgments of self. For comparison purposes, the figure includes the response in this region to self-reports made in isolation (gray bar). Significant repetition suppression was observed for self-reports that followed either an initial self-report (blue bars) or a judgment of a similar other (red bars), but not judgments of a dissimilar other (green bars). Error bars represent the 95% confidence interval for within-subject designs.

Like many of the cognitive heuristics that typically serve us well, but periodically lead to undesirable or maladaptive behavior, the use of self-reference in mentalizing may be a double-edged sword: a useful strategy for providing rich and accurate insights into the minds of similar individuals, but rife with the potential to exclude those minds assumed at first glance to be different from our own.

Posted by Deric Bownds at 7:15 AM
Email ThisBlogThis!Share to TwitterShare to FacebookShare to Pinterest
Blog Categories: mirror neurons, self, social cognition