Anxiety: fear in seach of a cause 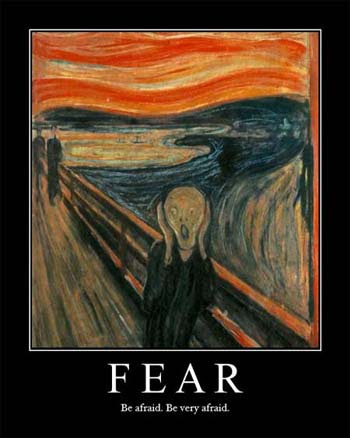 The title of this post is a pithy definition that Patricia Pearson gives in her recent book, "A BRIEF HISTORY OF ANXIETY... Yours and Mine", reviewed by William Grimes in the NY Times. From that review some clips:

Everywhere and nowhere, anxiety... In many cases it is the fear of fear itself, a free-floating, nebulous entity that, like a mutant virus, feeds on any available host. Reason is powerless against it. Ms. Pearson argues, in fact, that rationalism, intended to banish superstition and fear, has instead removed one of the most effective weapons against anxiety, namely religious faith and ritual.

...the worship of reason and science, by encouraging the notion that human beings can control their environment, has created a terrible fault line in the modern psyche, although not all societies suffer equally. Mexicans have lots to worry about but don’t. The World Mental Health Survey, conducted in 2002, found that only 6.6 percent of Mexicans had ever experienced a major episode of anxiety or depression. Meanwhile, to their north, 28.8 percent of the American population has been afflicted with anxiety, the highest level in the world. Mexicans who move to the United States adapt, becoming more anxious.

Posted by Deric Bownds at 6:00 AM
Email ThisBlogThis!Share to TwitterShare to FacebookShare to Pinterest
Blog Categories: fear/anxiety/stress