A collaborative study has considered several models that might explain why our behavior can be rapidly influenced by an emotional stimulus (a snake like shape that we jump away from) before the stimulus has been fully processed (and we realize that it is a coil of rope). Information influences action before perception is complete. The data can only be accounted for by a two-pathway architecture by which emotional visual information proceeds more directly via one pathway to the amygdala (and thus influences action) and at the same time more slowly by the second conventional visual pathway that establishes the perception of the actual nature of the stimulus. I'm showing here the abstract and then the basic figure describing the models.

Visual attention can be driven by the affective significance of visual stimuli before full-fledged processing of the stimuli. Two kinds of models have been proposed to explain this phenomenon: models involving sequential processing along the ventral visual stream, with secondary feedback from emotion-related structures ("two-stage models"); and models including additional short-cut pathways directly reaching the emotion-related structures ("two-pathway models"). We tested which type of model would best predict real magnetoencephalographic responses in subjects presented with arousing visual stimuli, using realistic models of large-scale cerebral architecture and neural biophysics. The results strongly support a "two-pathway" hypothesis. Both standard models including the retinotectal pathway and nonstandard models including cortical–cortical long-range fasciculi appear plausible. 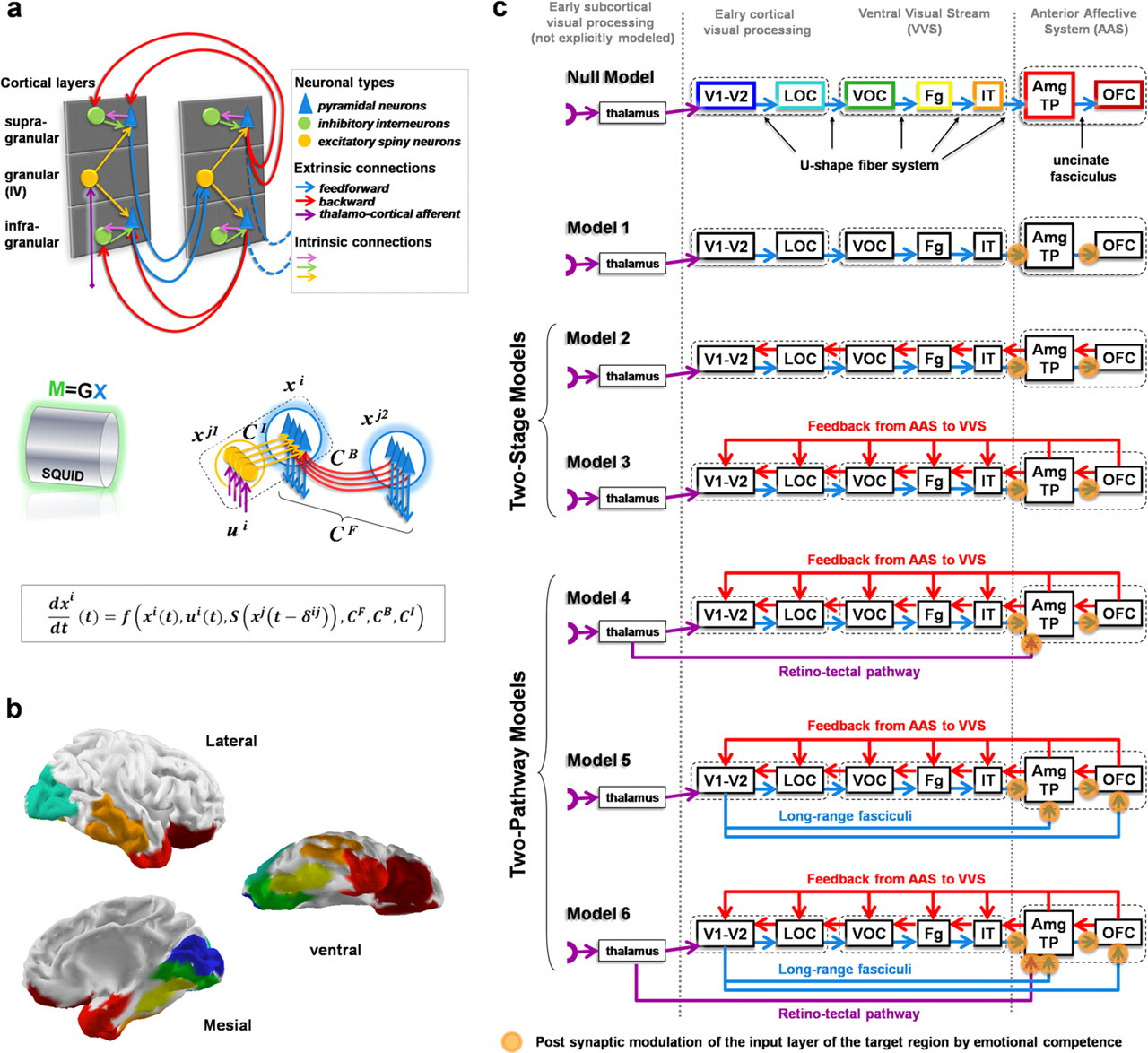 Tested models. (Click on image to enlarge) a, Basic components of the generic model, including all the possible types of connections used in this report, within and between two connected regions. Top, Cortical regions are modeled as three layered columns with three types of neuronal populations (pyramidal, excitatory spiny, and inhibitory interneurons), connected through intrinsic and extrinsic (feedforward and backward) connections. Bottom, The dynamics is mathematically expressed at the level of neural populations and is defined by nonlinear differential equations in which the change of state of each unit dxi/dt depends on its current state xi(t); thalamic inputs ui(t); average firing rate of afferents S(xj(t – {delta}ij)); transmission delays {delta}ij; forward, backward, and intrinsic effective connectivity matrices CF, CB, Ci, and other parameters. The MEG signal M is assumed to be related to the local average current density x generated by pyramidal populations through a linear forward model M = GX. b, Lateral, mesial, and ventral views of the mapping of the regions of interest common to all models on a reference cortical tessellation [for color code, see c (top row)]. c, Schematic representation of the architecture of the tested models. All the models share the same basic layout (see text). Null model, Simple feedforward model. Model 1, Adjunction of connectivity modulation. Model 2 (2-stage model), Adjunction of local feedbacks. Model 3 (2-stage model), Adjunction of long-range feedbacks from structures of the AAS (anterior affective system). Model 4 (2-pathway model), Adjunction of a direct subcortical retinotectal short-cut pathway to the AAS. Model 5 (2-pathway model), Alternative short-cut pathways to the AAS via the inferior longitudinal and frontal–occipital fasciculi. Model 6 (2-pathway model), Combination of models 4 and 5. Orange circles, "Synapses" at which modulation by emotional competence of the stimuli is implemented.

Posted by Deric Bownds at 7:00 AM
Email ThisBlogThis!Share to TwitterShare to FacebookShare to Pinterest
Blog Categories: attention/perception, emotion, fear/anxiety/stress