Whittle et al. have done fMRI experiments on adolescents that focused on three key brain regions which are known to represent critical nodes in neural networks supporting affective regulation: the amygdala, anterior cingulate cortex (ACC), and orbitofrontal cortex (OFC). Increased amygdala volume and a relative decrease of left versus right paralimbic ACC volumes were associated with increased duration of aggressive behaviors during parent-child interactions, with the latter association being apparent in males but not females. Decreased relative volume of left vs. right OFC was associated with greater reciprocity of dysphoric behaviors, the association also being specific to males. An absence of mean gender differences in affective behaviors suggests that the neural circuits underlying affective behaviors may differ for male and female adolescents during this age period. Here are some (slightly edited) comments by the authors:

The maturation of the prefrontal cortex and its inhibitory connections with the subcortex are key outcomes of the adolescent neurodevelopment that underlies the development of emotional and behavioral regulatory abilities. The associations of increased amygdala volume and decreased left frontal asymmetries with more negative affective behaviors may represent a delay in brain maturation. Longitudinal research would be needed to examine whether these findings have implications for the development of affective and behavioral dysregulation later in life.

The male specificity of this finding adds to a growing body of evidence that the neural mechanisms underlying affective processing differ between males and females. Males have been found to exhibit structural and functional brain asymmetries to a greater extent than females in a number of prefrontal areas, including the cingulate region. It has been suggested that these asymmetries may render males more vulnerable to certain disorders involving dysfunction of the frontal lobes such as ADHD, autism, and dyslexia. Although males in the present study did not display more aggressive behavior than females, the more pronounced relationship between ACCP asymmetry and aggressive affective behaviors in males suggests that aggressive affect in male adolescents may function as a mechanism by which their brain asymmetry is implicated in their risk for psychopathology.

Here is a useful figure that shows you the locations and variations in the anatomy of the cingulate structures being discussed: 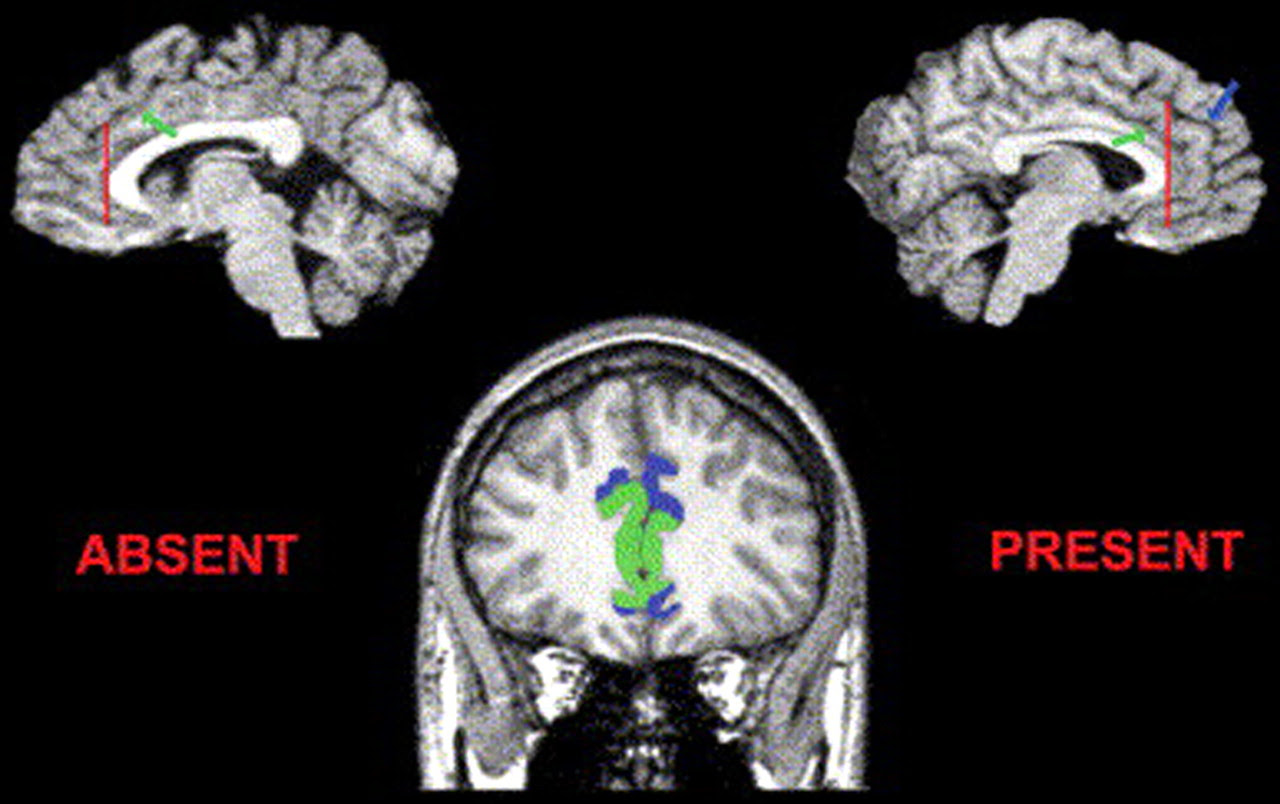 Figure-Example of changes in the location and extent of the limbic (ACCL; highlighted in green) and paralimbic (ACCP; highlighted in blue) anterior cingulate cortices as a function of variations in the cingulate sulcus (CS; green arrow, Upper row) and paracingulate sulcus (PCS; blue arrow, Upper row). A PCS is absent in the left-hand case and present in the right-hand case. The Upper row presents parasagittal slices through an individual's T1-weighted image. The coronal section illustrates the distinction between absent (left-hand side) and present (right-hand side) cases. Notice that the ACCP is buried in the depths of the CS when the PCS is absent and extends over the paracingulate gyrus when the PCS is present. The same principle applies throughout consecutive coronal sections.
Posted by Deric Bownds at 8:10 AM
Email ThisBlogThis!Share to TwitterShare to FacebookShare to Pinterest
Blog Categories: emotion, fear/anxiety/stress, human development, sex