Regulating the brain circuits of compassion

Here is yet more compelling evidence that you are what you spend your time imagining. In a recent study in PLoS ONE, Lutz, Davidson and colleagues extend their previous work on correlations between brain states and meditation to show that one particular kind of Buddhist meditation, which emphasizes empathetic and loving thoughts towards others and self, changes the brain's reactivity to emotional sounds. In experienced practitioners of the 'loving-kindness-compassion' meditation technique, such images caused larger reactions in the insular and anterior cingulate cortices than were observed in novices. Here is their abstract and one figure from the paper.

Recent brain imaging studies using functional magnetic resonance imaging (fMRI) have implicated insula and anterior cingulate cortices in the empathic response to another's pain. However, virtually nothing is known about the impact of the voluntary generation of compassion on this network. To investigate these questions we assessed brain activity using fMRI while novice and expert meditation practitioners generated a loving-kindness-compassion meditation state. To probe affective reactivity, we presented emotional and neutral sounds during the meditation and comparison periods. Our main hypothesis was that the concern for others cultivated during this form of meditation enhances affective processing, in particular in response to sounds of distress, and that this response to emotional sounds is modulated by the degree of meditation training. The presentation of the emotional sounds was associated with increased pupil diameter and activation of limbic regions (insula and cingulate cortices) during meditation (versus rest). During meditation, activation in insula was greater during presentation of negative sounds than positive or neutral sounds in expert than it was in novice meditators. The strength of activation in insula was also associated with self-reported intensity of the meditation for both groups. These results support the role of the limbic circuitry in emotion sharing. The comparison between meditation vs. rest states between experts and novices also showed increased activation in amygdala, right temporo-parietal junction (TPJ), and right posterior superior temporal sulcus (pSTS) in response to all sounds, suggesting, greater detection of the emotional sounds, and enhanced mentation in response to emotional human vocalizations for experts than novices during meditation. Together these data indicate that the mental expertise to cultivate positive emotion alters the activation of circuitries previously linked to empathy and theory of mind in response to emotional stimuli. 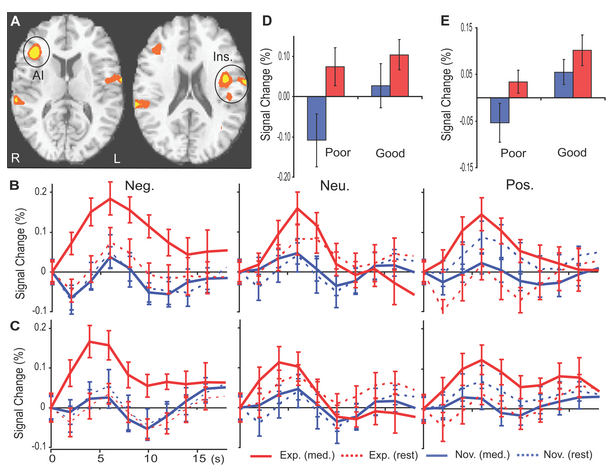