A voice region in the monkey brain

Both human and monkey brains have visual regions that are activated most strongly by the faces of conspecifics. Our brains also have have a region that is specialized for processing human voices that is located anteriorly on the temporal lobe, on the upper bank of the superior-temporal sulcus. Logothetis and his colleagues have now found a corresponding region in monkey brains. Their abstract and a portion of one of the figures:

For vocal animals, recognizing species-specific vocalizations is important for survival and social interactions. In humans, a voice region has been identified that is sensitive to human voices and vocalizations. As this region also strongly responds to speech, it is unclear whether it is tightly associated with linguistic processing and is thus unique to humans. Using functional magnetic resonance imaging of macaque monkeys (Old World primates, Macaca mulatta) we discovered a high-level auditory region that prefers species-specific vocalizations over other vocalizations and sounds. This region not only showed sensitivity to the 'voice' of the species, but also to the vocal identify of conspecific individuals. The monkey voice region is located on the superior-temporal plane and belongs to an anterior auditory 'what' pathway. These results establish functional relationships with the human voice region and support the notion that, for different primate species, the anterior temporal regions of the brain are adapted for recognizing communication signals from conspecifics. 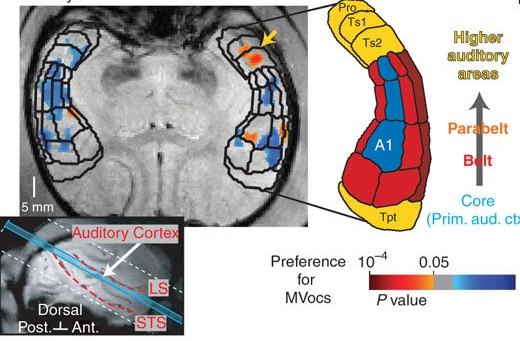 Posted by Deric Bownds at 7:00 AM
Email ThisBlogThis!Share to TwitterShare to FacebookShare to Pinterest
Blog Categories: animal behavior, evolution/debate, language