Watching musical improvisation in the brain

Limb and Braun have done a fascinating functional MRI study of brain activity changes distinctively associated with improvisation in professional jazz pianists (compared to production of learned musical sequences). They suggest that a pattern of focal activation of the medial prefrontal (frontal polar) cortex, along with extensive deactivation of dorsolateral prefrontal and lateral orbital regions, may reflect a combination of psychological processes required for spontaneous improvisation, in which internally motivated, stimulus-independent behaviors unfold in the absence of central processes that typically mediate self-monitoring and conscious volitional control of ongoing performance.

The patterns they observe suggest cognitive dissociations that may be intrinsic to the creative process: the innovative, internally motivated production of novel material (at once rule based and highly structured) that can apparently occur outside of conscious awareness and beyond volitional control.

You can check out the experimental paradigms used and also listen to audio samples of the musical excerpts provided in supporting information. 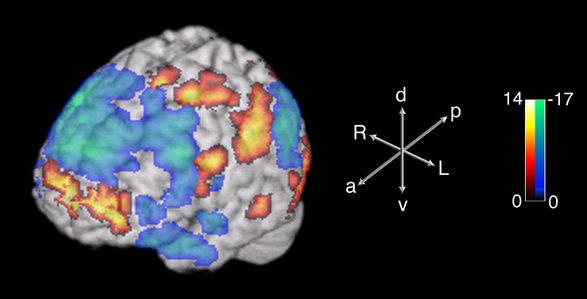