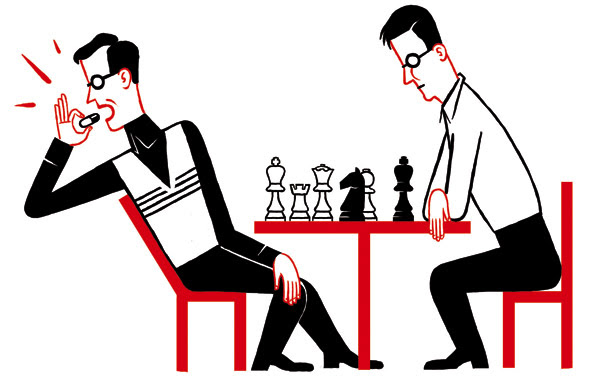 Have a look at Benedict Carey's article, "Brain Enhancement Is Wrong, Right?," in the NY Times Week in Review of 3/9/08. It continues the topic of using performance enhancing drugs, following up on a Nature article that I mentioned in my Feb. 1 post on the same subject. By the way, I have been meaning to point you to Chris Chatham's excellent post on how to use caffeine properly, obtaining effects on cognitive performance equivalent to those of modifanil. Here are some clips from the Carey article:

...two Cambridge University researchers reported that about a dozen of their colleagues had admitted to regular use of prescription drugs like Adderall, a stimulant, and Provigil, which promotes wakefulness, to improve their academic performance. The former is approved to treat attention deficit disorder, the latter narcolepsy, and both are considered more effective, and more widely available, than the drugs circulating in dorms a generation ago.

Francis Fukuyama raises the broader issue of performance enhancement: “The original purpose of medicine is to heal the sick, not turn healthy people into gods.” He and others point out that increased use of such drugs could raise the standard of what is considered “normal” performance and widen the gap between those who have access to the medications and those who don’t — and even erode the relationship between struggle and the building of character.

People already use legal performance enhancers, he said, from high-octane cafe Americanos to the beta-blockers taken by musicians to ease stage fright, to antidepressants to improve mood. “So the question with all of these things is, Is this enhancement, or a matter of removing the cloud over our better selves?”.

“You can imagine a scenario in the future, when you’re applying for a job, and the employer says, ‘Sure, you’ve got the talent for this, but we require you to take Adderall.’ Now, maybe you do start to care about the ethical implications.”

Posted by Deric Bownds at 8:00 AM
Email ThisBlogThis!Share to TwitterShare to FacebookShare to Pinterest
Blog Categories: acting/choosing, attention/perception, culture/politics