The maturing architecture of the brain's default network

From Raichle and others in the St. Louis group, an interesting story on the development of the brain network we most likely use for introspective mental activity:

In recent years, the brain's "default network," a set of regions characterized by decreased neural activity during goal-oriented tasks, has generated a significant amount of interest, as well as controversy. Much of the discussion has focused on the relationship of these regions to a "default mode" of brain function. In early studies, investigators suggested that, the brain's default mode supports "self-referential" or "introspective" mental activity. Subsequently, regions of the default network have been more specifically related to the "internal narrative," the "autobiographical self," "stimulus independent thought," "mentalizing," and most recently "self-projection." However, the extant literature on the function of the default network is limited to adults, i.e., after the system has reached maturity. We hypothesized that further insight into the network's functioning could be achieved by characterizing its development. In the current study, we used resting-state functional connectivity MRI (rs-fcMRI) to characterize the development of the brain's default network. We found that the default regions are only sparsely functionally connected at early school age (7–9 years old); over development, these regions integrate into a cohesive, interconnected network. 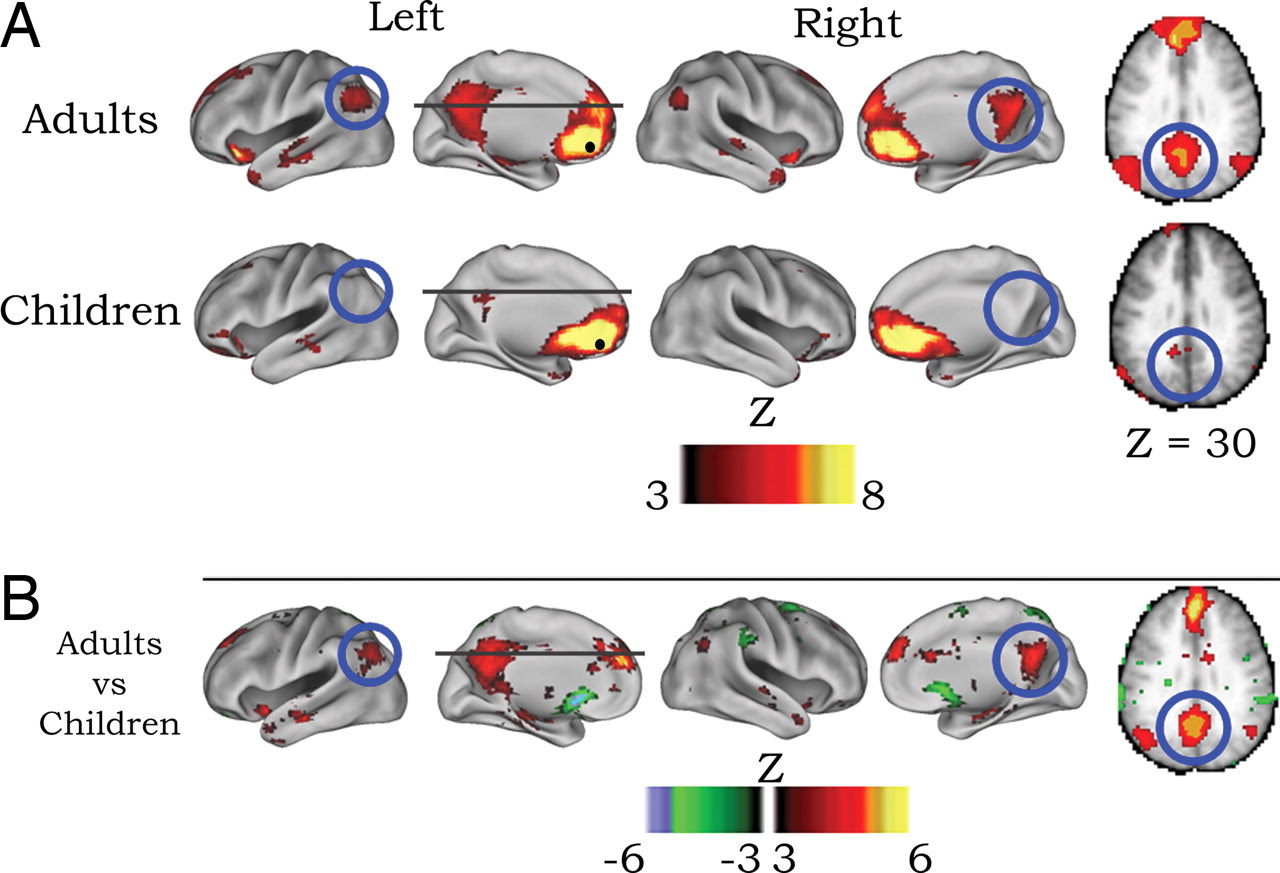 Figure legend - (click on figure to enlarge). Voxelwise resting-state functional connectivity maps for a seed region (solid black circle) in mPFC (ventral: –3, 39, –2). (A) Qualitatively, the rs-fcMRI map for the mPFC (ventral) seed region reveals the commonly observed adult connectivity pattern of the default network. The connectivity map in children, however, significantly deviates from that of the adults. Functional connections with regions in the posterior cingulate and lateral parietal regions (highlighted with blue open circles) are present in the adults but absent in children. (B) These qualitative differences between children and adults are confirmed by the direct comparison (random effects) between adults and children. mPFC (ventral) functional connections with the posterior cingulate and lateral parietal regions are significantly stronger in adults than children.

Posted by Deric Bownds at 7:00 AM
Email ThisBlogThis!Share to TwitterShare to FacebookShare to Pinterest
Blog Categories: attention/perception, consciousness, self