In the May issue of Trends in Cognitive Sciences David Badre reviews different models of the cognitive controls in our prefrontal cortex that support flexible behavior by selecting actions that are consistent with our goals and appropriate for our environment. I thought I would pass on two nice graphics from the papers, showing the structures and models involved. They do make the point that we have a long way to go before figuring out how the system works. 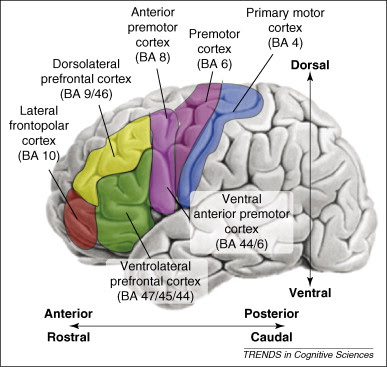 Figure (click to enlarge). Schematic of major anatomical sub-divisions in the frontal lobes. Boundaries and Brodmann areas (BA) are only approximate. Arrows indicate anatomical directions of anterior/rostral (front) versus posterior/caudal (back) and dorsal (up) versus ventral (down). From caudal to rostral, labeled areas include motor cortex, dorsal (PMd) and ventral premotor cortex, dorsal (pre-PMd) and ventral aspects of anterior premotor cortex, ventro- (VLPFC) and dorsolateral PFC (DLPFC), and lateral frontal polar cortex (FPC).

Figure: (Click to enlarge) Theoretical accounts of the rostro–caudal gradient in the PFC. (a) From a working memory perspective, rostral and caudal PFC can be distinguished on the basis of processing domain general versus specific representations. Hierarchical versions of this perspective propose that domain-specific posterior frontal regions can be modulated by the maintenance domain general rules in anterior DLPFC and FPC. (b) Relational complexity proposes a gradient in the PFC with respect to evaluation of simple stimulus properties, first-order relationships among the properties, and second-order relationships among relationships. (c) The cascade model proposes four levels of control that are distinguished by temporally disparate control signals, either sensory, context, episodic or branching. (d) Abstract representational hierarchy proposes that regions of the PFC are distinguished by the level of abstraction at which representations compete in a hierarchy of action representations.

Posted by Deric Bownds at 5:30 AM
Email ThisBlogThis!Share to TwitterShare to FacebookShare to Pinterest
Blog Categories: acting/choosing, consciousness