Is there wisdom in disgust? - moral psychology

Dan Jones writes an interesting essay in a recent issue of Science (PDF here) on how work in evolutionary theory, moral philosophy, and neuroscience casts doubt on the idea that disgust embodies a deep-seated wisdom. Instead it provides an emerging portrait of an evolutionarily constrained emotion that is a poor guide to ethical action. Here are some edited clips from his article:

Although the experience of disgust feels primal, the emotion does not seem to be widespread in other animals. Many species exhibit distaste in response to the sensory properties of food — such as sourness and bitterness — and a monkey, cat or human infant might spit out something disagreeable. But only humans beyond infancy will reject food on the basis of where it might have been and what it might have touched.

A clue is the language of moral indignation itself...All cultures and languages that we have studied have at least one word that applies both to core disgust (cockroaches and faeces) and also to some kind of social offence, such as sleazy politicians or hypocrites...people labelled as disgusting in this way evoke fears of contamination just as rotting food does...disgust drives some moral judgements, but ... they are mainly those relating to behaviour that involves bodily fluids or contact — gay sex, for instance — rather than more abstract issues.

Clues suggest a physiological reality for moral disgust. Whereas anger pushes the heart rate up, being viscerally disgusted makes it drop. Experiments done by Haidt and Sherman showed
... people hooked up to a heart monitor video footage of morally negative but not viscerally disgusting behaviour, such as an American neo-Nazi meeting. The participants said that the video triggered disgust and anger, and on average their heart rates fell, not rose. What's more, those who reported increased clenching in their throat had a greater drop in heart rate, making the link with core disgust look stronger.
...this is the first physiological evidence that socio-moral disgust really is disgust and not just metaphor or anger.

Brain imaging studies might also point to an overlap between core and moral disgust... Moll...used magnetic resonance imaging (MRI) to monitor the flow of blood in the brains of 13 healthy adult volunteers as they mulled over situations evocative of core disgust and those that elicit self-reported moral disgust or indignation. He found that core and moral disgust recruit overlapping brain areas, particularly the lateral and medial orbitofrontal cortex, suggesting that the emotions are related. These regions of the brain are activated by unpleasant sensory stimuli, and they connect with other emotion-related areas, such as the amygdala.

Evolution suggests that the human moral faculty — the psychological systems that make judgements about right and wrong, what's permissible and what isn't — was cobbled together from pre-existing brain systems over millions of years of biological and cultural evolution. Along the way, it latched onto disgust as a useful tool...The experimental data point to the possibility that our disgust system might have been adapted by evolution to allow us to reject or disapprove of abstract concepts such as ideologies and political views that are deeply influenced by culture, as well social groups associated with 'disgusting' concepts...In making symbolic distinctions between us and them visceral, disgust could potentially foster greater cohesion within groups by bringing people together in defence against a common out-group...Disgust works for the group as it does for the individual — what is in the group is 'me' and what is not is 'not me'...Where core disgust is the guardian of the body, moral disgust acts as the guardian of social body — that's when disgust shows its ugliest side. 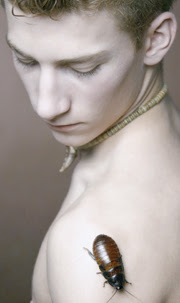 ...disgust is an emotion we are stuck with. Heuser suggests that the challenge... is to make people more reflective about what they say and think. He cites the success that advocates of political correctness have had in lowering the prevalence of casually sexist and racist language. Moll suggests optimistically that cultivating cultural and personal values of tolerance and empathy could function as an antidote to the toxic effects of disgust...by thinking less with our guts, and more with our heads and hearts, we might be able push back the boundaries of our moral world.

As in this Figure, Beauty or beast: things that once disgusted can in new contexts be tolerated.
Posted by Deric Bownds at 6:35 AM
Email ThisBlogThis!Share to TwitterShare to FacebookShare to Pinterest
Blog Categories: culture/politics, emotion, evolutionary psychology, morality, psychology