Our brains putting the brakes on... "free won't" versus "free will"

One effort to rescue free will from the implication's of Libet's famous experiment (showing brain activity underlying an action starts before we are of aware of intending that action) has been to say "OK, even if "it" has started the action before "we" intended it, we can still shut it off. We still have "free won't."

Aron et al have now shown that the ability to stop motor reponses may involve a "hyperdirect" pathway between the right inferior frontal cortex and the basal ganglia (PDF of article here). Here is their abstract, followed by a figure from the paper:

The ability to stop motor responses depends critically on the right inferior frontal cortex (IFC) and also engages a midbrain region consistent with the subthalamic nucleus (STN). Here we used diffusion-weighted imaging (DWI) tractography to show that the IFC and the STN region are connected via a white matter tract, which could underlie a "hyperdirect" pathway for basal ganglia control. Using a novel method of "triangulation" analysis of tractography data, we also found that both the IFC and the STN region are connected with the presupplementary motor area (preSMA). We hypothesized that the preSMA could play a conflict detection/resolution role within a network between the preSMA, the IFC, and the STN region. A second experiment tested this idea with functional magnetic resonance imaging (fMRI) using a conditional stop-signal paradigm, enabling examination of behavioral and neural signatures of conflict-induced slowing. The preSMA, IFC, and STN region were significantly activated the greater the conflict-induced slowing. Activation corresponded strongly with spatial foci predicted by the DWI tract analysis, as well as with foci activated by complete response inhibition. The results illustrate how tractography can reveal connections that are verifiable with fMRI. The results also demonstrate a three-way functional–anatomical network in the right hemisphere that could either brake or completely stop responses. 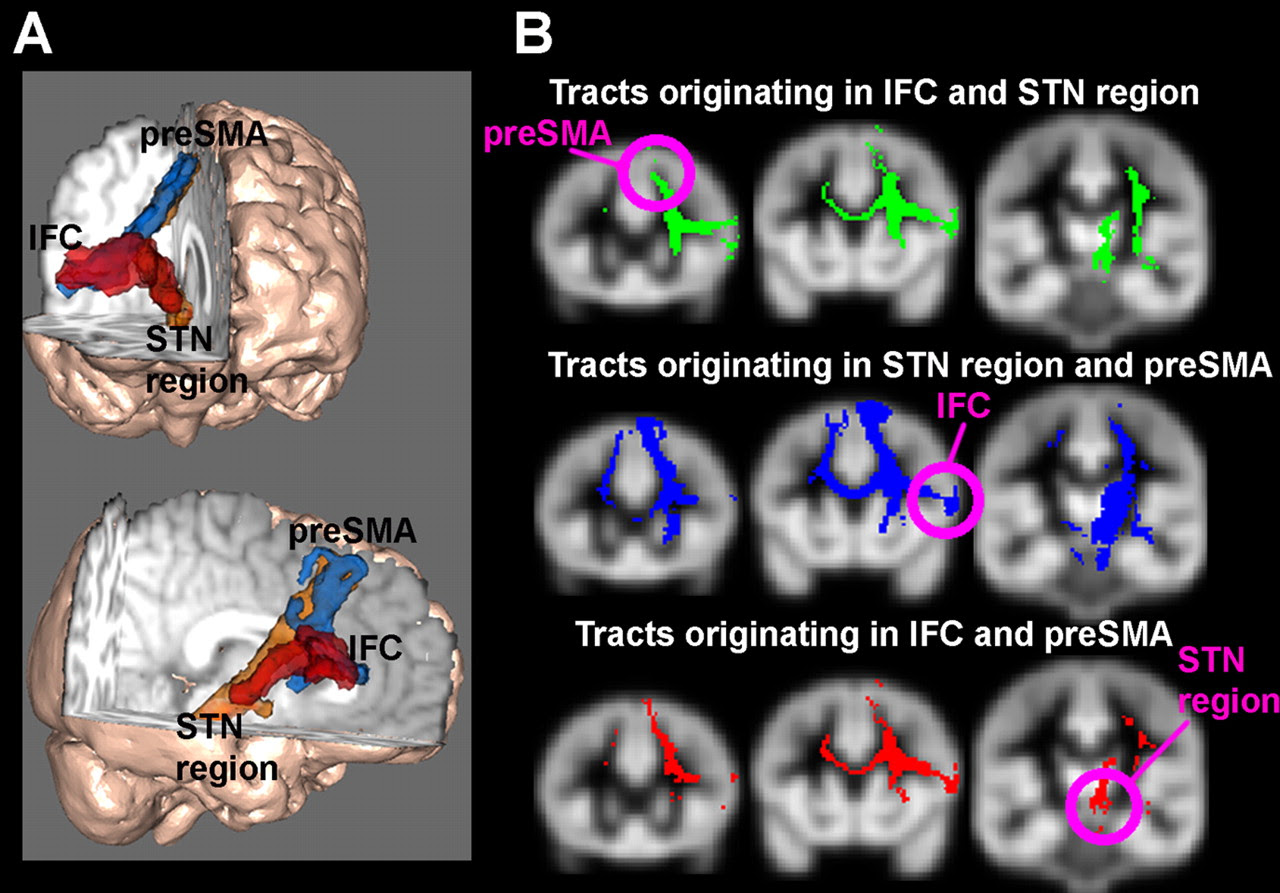 Posted by Deric Bownds at 6:18 AM
Email ThisBlogThis!Share to TwitterShare to FacebookShare to Pinterest
Blog Categories: acting/choosing