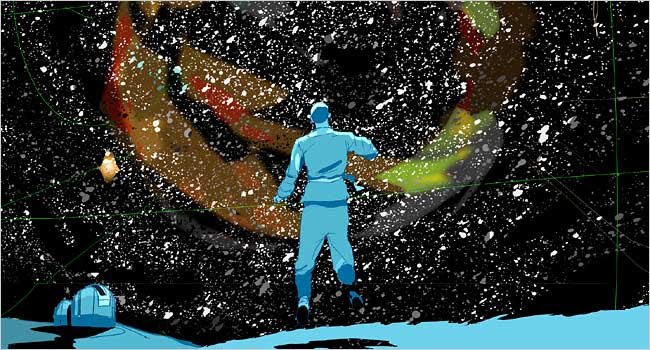 Although I don't usually mention physics and cosmology in this blog, I would recommend a rather fascinating piece by Dennis Overbye in the science section of the New York Times (PDF here) "The Universe, Expanding Beyond All Understanding." We know space is sprinkled from now to forever with galaxies rushing away from one another under the impetus of the Big Bang. Overbye discusses several pieces of work showing that:

If things keep going the way they are... in 100 billion years the only galaxies left visible in the sky will be the half-dozen or so bound together gravitationally into what is known as the Local Group, which is not expanding and in fact will probably merge into one starry ball...Unable to see any galaxies flying away, those astronomers will not know the universe is expanding and will think instead that they are back in the static island universe of Einstein...observers in our ‘island universe’ will be fundamentally incapable of determining the true nature of the universe...future cosmologists...will puzzle about why the visible universe seems to consist of six galaxies.

"I have the uneasy feeling that the U.S.A. is headed into asymptotic futility well before that."

Posted by Deric Bownds at 6:40 AM
Email ThisBlogThis!Share to TwitterShare to FacebookShare to Pinterest
Blog Categories: evolution/debate