Perception Without a Perceiver

Rafeal Malach gave an interesting talk at the recent ASSC meeting (PDF of article here) on work from his group that he thinks:

challenges the conventional models of human perception, which assume that sensory experience involves a critical interplay between activity in sensory cortex representing the stimulus and pre-frontal cortex which serves as an “observer” system- receiving and interpreting the patterns of activity originating in posterior, sensory cortex.

In an fMRI study in which individuals were exposed to a highly engaging popular movie they find:

a surprisingly robust and wide-spread activation of most of the posterior part of the brain- which was remarkably “synchronized” across individuals watching the same movie. These results attest to the massive engagement of sensory cortex by naturalistic sensory stimuli. However, in contrast to this wide-spread activation in sensory cortex- we have found a remarkably little activation in frontal areas of the brain (Fig. 1). 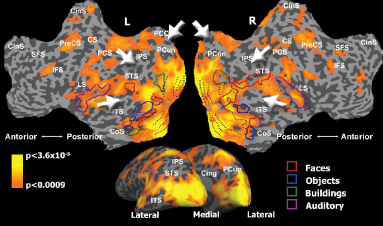 To examine this issue, and also to start mapping in more detail the functional organization of the various networks of pre-frontal cortex:

we have conducted a series of experiments in which we mapped brain activity during tasks that were explicitly targeted at eliciting “self-related” brain activity- such as introspection to visual and auditory modalities, or self-judgment evaluations. Although these were high level cognitive tasks of extreme complexity- our results show a remarkably consistent pattern of activity focused primarily on pre-frontal cortex (see yellow patches in figure 2)...The critical question was now- how do these areas behave when the task shifts to a purely perceptual one? The results were clear cut- the activity shifted now to a different set of areas- located more posteriorly in sensorymotor
cortex (green patches in fig. 2).

Fig. 2 Comparing brain activity during reflective self-related tasks and during intense perception. Prefrontal areas (yellow patches) showed significant activation during self-related introspection and self judgment tasks. However a completely different and highly segregated network of more posterior areas were active during engaging perceptual tasks (green patches). No overlap was found between the two networks, and the prefrontal cortex was actually inhibited during intense perception. The results clearly rule-out the need for an “observer” function in self-related
cortex during perception.

... actually compatible with the strong intuitive sense we have of 'losing our selves' in a highly engaging sensory-motor act (such as watching a movie). They are intriguingly reminiscent of recurrent eastern philosophical themes which emphasize the ‘silencing' of the self during intense engagement with the outside world.

Posted by Deric Bownds at 6:23 AM
Email ThisBlogThis!Share to TwitterShare to FacebookShare to Pinterest
Blog Categories: attention/perception, self