How the body shapes intelligence 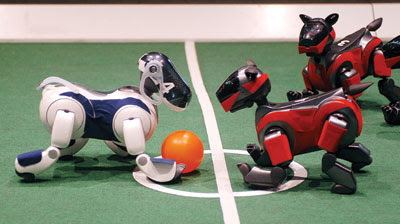 Kitano reviews a new book in Nature (PDE of review here): How the Body Shapes the Way We Think: A New View of Intelligence. by Rolf Pfeifer & Josh Bongard, Bradford Books: 2006. A few clips:

...a chess computer, unlike a human, does not have a body to enable it to interact with its environment, for example. This distinction differentiates two views on intelligence. One view is that intelligence is independent of the body and is unaffected by its existence, shape and function. The other view is that intelligence is contained within a physical body and that the body shapes the mind, an idea often referred to as physical embodiment or the presence of a behaviour-based agent.

One salient difference between the intelligent agents discussed in this book and traditional artificial-intelligence systems, as represented by chess computers, is the contextual thickness of system behaviours. Many of the robotics systems discussed in the book can cope, at least to some extent, with changes in the expected environment, tasks and other assumed conditions, whereas chess computers and other traditional artificial-intelligence systems are usually extremely fragile when faced with even a small change in such conditions. Behaviour-based robots should be able to perform almost flawlessly if the size of road or unevenness of terrain deviates from the initial assumption. However, the results will be catastrophic if a chess computer is given a chess board with nine rows and columns, rather than eight, as they are tuned specifically for the existing rules of chess. Imagine a thought experiment on a chess game between a behaviour-based system and an existing chess computer. The chess computer would be unbeatable with the defined rules, but if the rules were modified the behaviour-based system may do better.

Posted by Deric Bownds at 10:00 AM
Email ThisBlogThis!Share to TwitterShare to FacebookShare to Pinterest
Blog Categories: embodied cognition, technology