When Lots of Money Makes You Feel Rich

I'm passing on a curious (and not too surprising) short piece by Alex Mindlin in the New York Times with the same title this post:

Anyone who has ever thrown around a stack of liras or rupees knows that people are sometimes more extravagant with currencies that have high face values. A paper recently published in The Journal of Consumer Research explored that effect...In one study, students in Hong Kong, when asked to allocate spending from an imaginary paycheck of 9,000 Hong Kong dollars, devoted an average of 532.35 of those dollars to food spending...Two weeks later, the students were asked to imagine that they had moved to the fictional country of Tristania, where a Hong 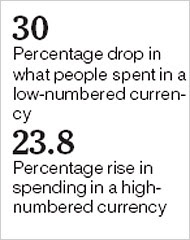 Kong dollar equaled 18 Tristanian dollars, and therefore their pay was 162,000 Tristanian dollars. The students splurged, spending 30 percent more on food in real terms...The opposite effect was seen among students sent to an alternate Tristania where their paychecks were worth only 500 Tristanian dollars...“You feel more rich if you have more units of currency,” said Dilip Soman, a professor of marketing at the University of Toronto, and one of the paper’s authors...Earlier studies have been taken to suggest the opposite — that consumers are wary of spending in “numerous” foreign currencies, because they are put off by the high numbers on price tags. But Mr. Soman said that those studies had not taken budgeting into account.

Posted by Deric Bownds at 6:25 AM
Email ThisBlogThis!Share to TwitterShare to FacebookShare to Pinterest
Blog Categories: culture/politics, motivation/reward, psychology