Harvard Magazine has an outstanding article with nice graphics on the astounding diversity of microbial life. 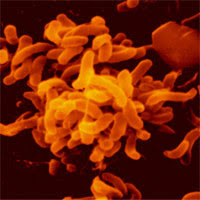 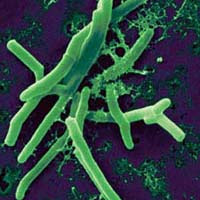 In terms of gene content, humans and potatoes are more closely related than these two bacteria are to each other—one measure of bacterial diversity. On the left, Vibrio cholerae; on the right, Mycobacterium tuberculosis.

The anthropocentric five-kingdom system classified all unicellular organisms lacking nuclei (archaea and bacteria) as Monera. The nucleated eukaryotes comprising plants, animals, and fungi were thought to represent the bulk of biological diversity. All other nucleated eukaryotes were grouped in a grab-bag classification known as Protista.

The modern “tree of life,” based on genetic analysis, shows that the bulk of Earth’s biodiversity resides among the Archaea, Bacteria, and that portion of the Eukarya that does not include plants, animals, and fungi.
Posted by Deric Bownds at 12:07 PM
Email ThisBlogThis!Share to TwitterShare to FacebookShare to Pinterest
Blog Categories: evolution/debate