Sharot et al. examine the tendency of most of us to imagine more optimistic outcomes than can be justified by sober appraisal. A moderate amount of optimistic illusion has been related to mental and physical health, and the general idea is that it is adaptive and useful because it motivates us towards future goals. Their abstract, and a figure showing the relevant brain regions:

Humans expect positive events in the future even when there is no evidence to support such expectations. For example, people expect to live longer and be healthier than average, they underestimate their likelihood of getting a divorce, and overestimate their prospects for success on the job market. We examined how the brain generates this pervasive optimism bias. Here we report that this tendency was related specifically to enhanced activation in the amygdala and in the rostral anterior cingulate cortex when imagining positive future events relative to negative ones, suggesting a key role for areas involved in monitoring emotional salience in mediating the optimism bias. These are the same regions that show irregularities in depression, which has been related to pessimism. Across individuals, activity in the rostral anterior cingulate cortex was correlated with trait optimism. The current study highlights how the brain may generate the tendency to engage in the projection of positive future events, suggesting that the effective integration and regulation of emotional and autobiographical information supports the projection of positive future events in healthy individuals, and is related to optimism. 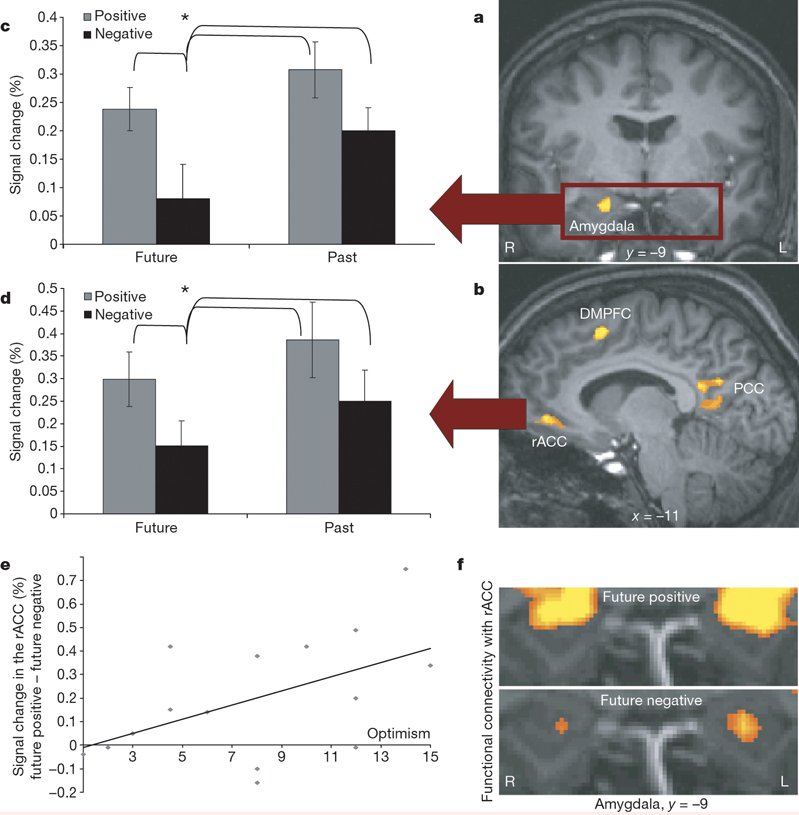 The authors collected functional magnetic resonance imaging (fMRI) data while participants thought of autobiographical events related to a description of a life episode (for example, 'winning an award' or 'the end of a romantic relationship'). The word 'past' or 'future' indicated if they should think of an event that occurred in the past or one that might occur in the future. Trials were classified into positive, negative and neutral according to participants' ratings. They found that future positive events were rated as more positive than past positive events, and were imagined to be closer in temporal proximity then future negative events and all past events. (Click on image to enlarge it)

Posted by Deric Bownds at 6:15 AM
Email ThisBlogThis!Share to TwitterShare to FacebookShare to Pinterest
Blog Categories: futures, happiness, psychology