This is Your Brain on Politics

Marco Iacoboni, whose work I have mentioned before, has together with several collaborators performed brain imaging experiments on 20 swing voters who indicate willingness to vote for a candidate from either party in the Nov. 2008 presidential elections. They summarize their findings in an Op-Ed piece in the Nov. 11 New York Times. There is a slide show you might like to watch. While insiders in the imaging business go apoplectic over simplistic interpretations of averaged data taken from a small number of subjects using ambiguous protocols with dubious controls, some correlations do emerge that "make sense." (See these comments on the article as 'junk science'.) For example: anterior cingulate (conflict resolution) associates with Hillary Clinton; or amygdala (anxiety) and insula (disgust) correlates with viewing the words "Democrat" or "Republican" but not "independent". One bit I found interesting: "Barack Obama and John McCain have work to do. The scans taken while subjects viewed the first set of photos and the videos of Mr. McCain and Mr. Obama indicated a notable lack of any powerful reactions, positive or negative." 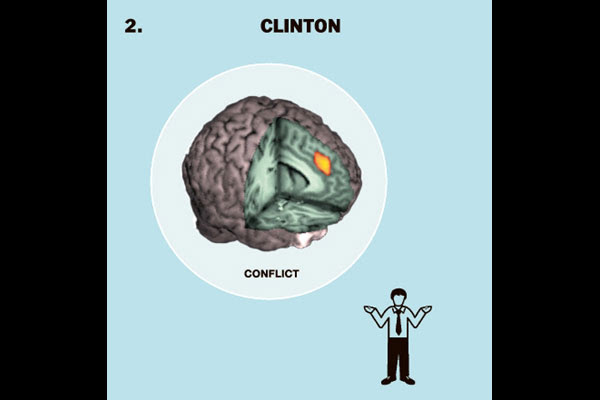 Slide 2
Photos of Hillary Clinton elicited increased activity in the anterior cingulate cortex, a part of the brain that processes conflicting impulses, in swing voters who reported having an unfavorable opinion of her.
Posted by Deric Bownds at 6:30 AM
Email ThisBlogThis!Share to TwitterShare to FacebookShare to Pinterest
Blog Categories: culture/politics, emotion, fear/anxiety/stress, technology, unconscious