The moment of recognition...

Ploran et al. use fMRI to observe brain activity leading up to recognition of a perceptual object's identity. Here is their abstract, followed by a composite graphic extracted from figures in the paper.

Decision making can be conceptualized as the culmination of an integrative process in which evidence supporting different response options accumulates gradually over time. We used functional magnetic resonance imaging to investigate brain activity leading up to and during decisions about perceptual object identity. Pictures were revealed gradually and subjects signaled the time of recognition (TR) with a button press. We examined the time course of TR-dependent activity to determine how brain regions tracked the timing of recognition. In several occipital regions, activity increased primarily as stimulus information increased, suggesting a role in lower-level sensory processing. In inferior temporal, frontal, and parietal regions, a gradual buildup in activity peaking in correspondence with TR suggested that these regions participated in the accumulation of evidence supporting object identity. In medial frontal cortex, anterior insula/frontal operculum, and thalamus, activity remained near baseline until TR, suggesting a relation to the moment of recognition or the decision itself. The findings dissociate neural processes that function in concert during perceptual recognition decisions. 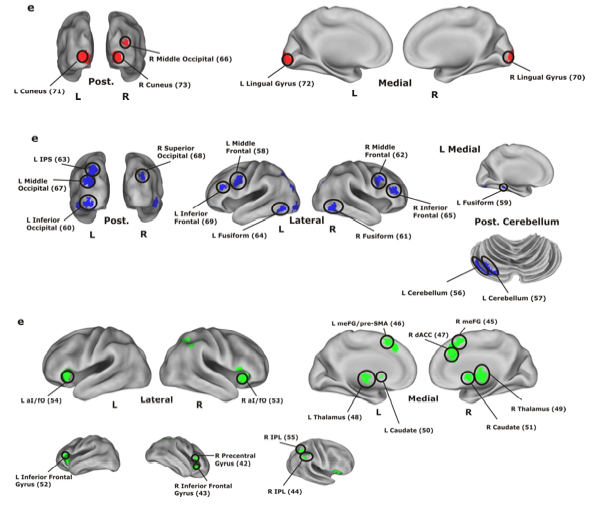 Composite extracted from figures in paper (click on graphic to enlarge and see labels): From interpolation analyzes, the top row shows brain regions of interest for initial sensory processing, the second row regions active in accumulation, and the bottom row regions active when recognition of the stimulus is signalled.
Posted by Deric Bownds at 7:00 AM
Email ThisBlogThis!Share to TwitterShare to FacebookShare to Pinterest
Blog Categories: attention/perception