The brain in glorious color - "Brainbows" 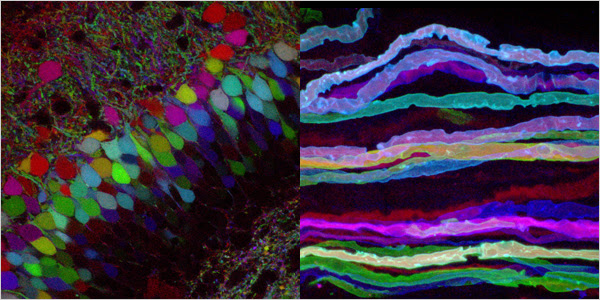 The scientists bred mice so their brain cells had genetic inserts containing genes for three colors of fluorescent protein, red, green and blue. They prompted each insert to randomly express one color, using a genetic trigger. Because there were multiple copies of the three-gene insert in each cell, the cell itself expressed a random mixture of the three colors, some 90 shades in all. What emerged was a kind of beaded rainbow belt of neurons, with the fluorescent glow radiating out through each cell’s neural branches. The researchers called the technique “Brainbow.”

Scientists can use this technique in animals, whose brain systems work in ways similar to those of humans, to see exactly where each cell begins and ends, both within the brain and out through the spine and the limbs — and what happens in between.

“I take a view that this is like the Hubble telescope,” said Dr. Jeff Lichtman, a professor of molecular and cellular biology at Harvard who is the paper’s senior author. “We’ve never been able to look at the brain this way before. Why not just start looking and see what we observe?”

Posted by Deric Bownds at 6:45 AM
Email ThisBlogThis!Share to TwitterShare to FacebookShare to Pinterest
Blog Categories: technology