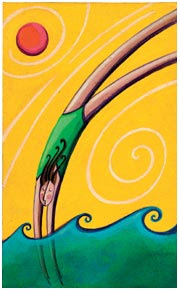 Welberg offers a summary and review of work by Willeit et al. on the role of serotonin, and a serotonin transporter, in seasonal affective disorder. Here is an portion of the review:

Short, dark winter days put most of us in a gloomy mood, but in people with seasonal affective disorder (SAD), they can cause severe clinical depression. Fortunately, this depression can be treated with bright-light therapy (BLT), and it disappears altogether in summer. Willeit et al. now show that these changes in mood are associated with alterations in the efficiency of the serotonin (5-hydroxytryptamine) transporter (5-HTT) in the patients' blood platelets.

One theory of depression posits that impaired functioning of monoamine neurotransmitters, such as serotonin, causes the disorder, but it is unknown how this impairment might arise. Serotonin levels in the synapse are controlled by the 5-HTT, and Willeit and colleagues therefore investigated whether alterations in 5-HTT functioning might underlie depression in SAD.

The authors compared people with SAD with healthy volunteers, and assessed 5-HTT functioning in winter, after 4 weeks of BLT and in summer. They did this by measuring 5-HTT-mediated inward and outward transport in blood platelets (which are easily obtainable). In winter, both inward transport rate and outward transport were enhanced in the platelets of SAD patients compared with healthy controls. Importantly, these differences in platelet 5-HTT functioning disappeared after 4 weeks of BLT and were absent in summer. The number of 5-HTTs and their affinity for serotonin did not change with BLT or with the seasons, indicating that the increased 5-HTT inward transport that was found in SAD patients was due to increased efficiency of the transporter.

Posted by Deric Bownds at 5:40 AM
Email ThisBlogThis!Share to TwitterShare to FacebookShare to Pinterest
Blog Categories: brain plasticity, fear/anxiety/stress, self help