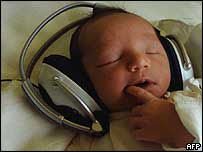 About four percent of the population has congenital amusia, a lifelong disability that prevents otherwise normal functioning individuals from developing basic musical skills. The condition has also been variously termed note deafness, tone deafness, or tune deafness. Here is an interesting abstract from Hyde et al. on the amusic brain, along with one figure from the paper:

Congenital amusia (or tone deafness) is a lifelong disorder characterized by impairments in the perception and production of music. A previous voxel-based morphometry (VBM) study revealed that amusic individuals had reduced white matter in the right inferior frontal gyrus (IFG) relative to musically intact controls. However, this VBM study also revealed associated increases in gray matter in the same right IFG region of amusics. The objective of the present study was to better understand this morphological brain anomaly by way of cortical thickness measures that provide a more specific measure of cortical morphology relative to VBM. We found that amusic subjects (n = 21) have thicker cortex in the right IFG and the right auditory cortex relative to musically intact controls (n = 26). These cortical thickness differences suggest the presence of cortical malformations in the amusic brain, such as abnormal neuronal migration, that may have compromised the normal development of a right frontotemporal pathway.

Posted by Deric Bownds at 6:00 AM
Email ThisBlogThis!Share to TwitterShare to FacebookShare to Pinterest
Blog Categories: attention/perception, music