The research highlights section of the Nov. 1 issue of Nature points to an interesting article from Nester's group on a strain of mice susceptible to social stress. A description excerpted from a review by Hymen:

...mice are exposed to 10 bouts of social defeat in which c57bl/6 test mice are forced to intrude into space occupied by mice of a larger and more aggressive strain, leading to subordination of the test mice. Following this repeated stress, a subset of mice develop significant avoidance of social contact with mice of the same strain and exhibit other signs that are reminiscent of symptoms of human depression, including weight loss and loss of hedonic (pleasure) responses to sucrose. A strength of the social defeat stress model is that, at least in this mouse strain, the stressor convincingly separates the mice into two groups, a group that the authors designate “Susceptible,” which develop social avoidance, and a group described as “Unsusceptible,” which continue to interact with other mice at the same rate as never stressed controls. The model has other strengths. Repeated social defeat would appear to be a good model for some adverse human experience. Moreover, the traits that emerge in susceptible mice reverse only with chronic antidepressant treatment, which mirrors the requirements for treatment of depression and anxiety disorders with these drugs in humans. 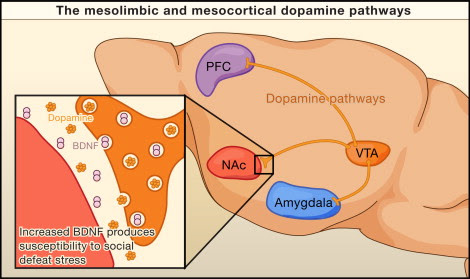 The mesolimbic dopamine pathway comprises a projection from the ventral tegmental area (VTA) of the midbrain to the nucleus accumbens (NAc) and to other forebrain structure, such as the amygdala and prefrontal cortex (PFC). These dopamine projections, which act as the neural substrates of the rewarding properties of food, mating behaviors, and addictive drugs, are now shown by Krishnan et al. (2007) to mediate the response of mice to social defeat. In mice susceptible to social defeat, expression of brain-derived neurotrophic factor (BDNF) increases in the VTA. The NAc is the recipient of increased BDNF release and shows enhanced downstream signaling via the BDNF receptor.

Posted by Deric Bownds at 6:25 AM
Email ThisBlogThis!Share to TwitterShare to FacebookShare to Pinterest
Blog Categories: emotion, fear/anxiety/stress