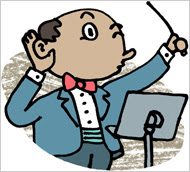 Here is an interesting tidbit that makes perfect sense to me as a pianist, from Eric Nagourney reporting in the NY Times on the Society for Neuroscience Meetings:

To concentrate on a difficult task that involves listening, people tend to unconsciously divert their attention from what they are seeing. But music conductors, a new study reports, are not as apt to be distracted in this way....The researchers, who presented their findings at a recent conference of the Society for Neuroscience, used magnetic resonance imaging to compare how 20 conductors and 20 nonmusicians handled complex auditory tasks...The researchers were from Wake Forest University Baptist Medical Center and the University of North Carolina at Greensboro. They were especially interested in learning whether their subjects would continue shifting resources as the demands of listening became more complex, said the lead author, Dr. W. David Hairston of Wake Forest...The volunteers were placed in an M.R.I. scanner and asked to listen to different notes over headphones while keeping their eyes open. As the notes were played closer and closer together, they were asked to say which they heard first...In both groups, activity in the parts of the brain involved with seeing decreased, but as the task became more difficult, only the nonmusicians turned off more of their visual processing...Part of the explanation may lie in the need for conductors to make extensive use of both their eyes and ears, to read the score and “to keep track of who’s playing what,” Dr. Hairston said.

Posted by Deric Bownds at 6:00 AM
Email ThisBlogThis!Share to TwitterShare to FacebookShare to Pinterest
Blog Categories: attention/perception, music