The possibility of impossible cultures.

Marc Hauser offers an essay in the 9 July issue of Nature, in which he suggests points of contact between work in the generative tradition of linguistics (Chomsky, etc.) and evolutionary developmental biology research on animal forms. Just as a developing animal form faces a massive range of possible variation:

...in the same way that biologists speak of morphospaces — n-dimensional volumes that define the range of existing and potential morphological variation — linguists can speak of 'linguaspaces'. These are n-dimensional environments that constrain the set of possible languages and therefore, by definition, establish the set of impossible languages. What is necessary, therefore, is to establish the set of parameters that allow the range of variation and place constraints on its overall form.

...a point of contact concerns how the internal language system ultimately forms an acquired and externalizable language. If, as discussed earlier, the acquisition device constrains the range of possible languages by providing a set of options, then the role of environmental input is to favour, and thus select, certain options over others. This selective perspective, although uncommon in the mind sciences, aligns more closely with other work in biology, including studies of the immune system, the development of animal forms, the wiring of neurons and the acquisition of bird song. For example, songbirds have evolved brains with a set of developmental options for creating variation in song-relevant acoustic forms. Depending on the environment, certain note types are selected and are then reproduced in particular orders to create population-specific dialects — and so it is for language acquisition by humans. When a child is exposed to a particular linguistic environment, the relevant linguistic input or experience fixes the available options to create an externalizable language that is comprehensible to those who will care for and compete with the child.

Research in the generative tradition of linguistics suggests therefore that, like the variety of animal forms, the sense of unbounded variation in linguistic form is illusory, concealing a suite of universally held, biologically instantiated mechanisms for generating variation, allowing acquisition and constraining the space of possible languages. Although biologists have long sensed the close connection between the generative properties of language and generative biological systems, including the immune system, microbial diversity and proteonomics (the study of protein function and expression) relatively few students of the mind sciences have acknowledged such connections with other domains of human knowledge.

Heuser suggests that only humans have evolved four computational capacities, constituting a phylogenetic mind gap between humans and other animals:

Generative computation Recursive and combinatorial operations provide the only known mechanisms for generating an almost limitless variety of meaningful expressions, whether mathematical, linguistic, musical or moral. Recursion is an iterative operation, in which a rule is called up repeatedly to create new expressions, be they embedded phrases within a sentence, new musical scores with repeating themes, or tools within tools (for example, a Swiss army knife). Each expression has a unique interpretation or function depending on the arrangement of the elements. By contrast, combinatorial operations allow discrete elements to be unified and ordered, thus creating new ideas, which could be expressed as novel words (Walkman from walk and man) or novel musical forms.

Mental symbols Humans readily, without instruction, convert sensory experiences and abstract thoughts into externalized symbols, either as words or images. This capacity cuts across domains of knowledge and sensory experience, enabling humans to express beliefs in sentences, to depict particular melodies with explicit notations, and to provide logos indicating when to turn off the highway for a hamburger or a coffee.

Promiscuous interfaces Humans have unique creative capacities and problem-solving abilities, which stem from the capacity to combine representations promiscuously from different domains of knowledge. For instance, humans can combine the concepts of number, belief, causality and harm in deciding that it is sometimes morally obligatory to harm one person to save the lives of many.

Abstract thought Some thoughts derive from direct sensory experiences: for example, thinking of red items such as cherries and blood requires experience with these, as opposed to non-red objects such as celery and bone. But many human thoughts are abstract, with no explicit or even necessary sensory connection. These include concepts such as infinity, grammatical categories such as nouns and verbs, and ethical judgments such as permissible and forbidden. 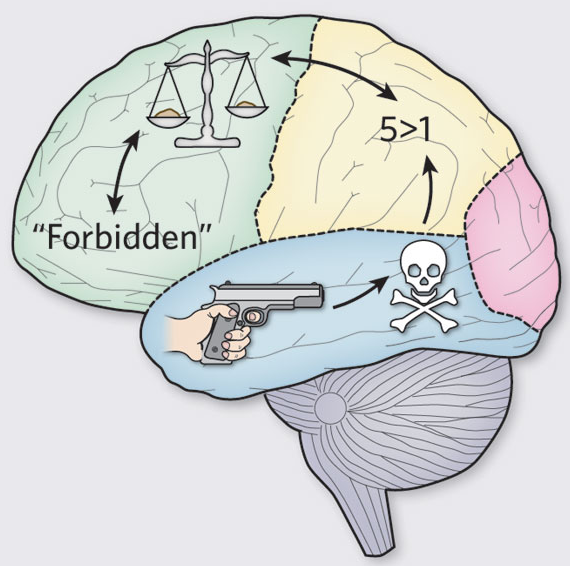 The generative mechanisms that underpin so much of human mental life acquire their expressive power because the recursive and combinatorial operations can functionally 'grab' the outputs of different modular systems or domains of knowledge. This capacity for promiscuously creating interfaces between domains is almost absent in animals. Thus, although both human and animal brains are characterized by modular functions and mechanisms, the modular outputs are typically restricted to a single functional problem in animals but are broadly accessible in humans. Non-human animals therefore show a form of myopic intelligence, designed to solve one problem with exquisite efficiency. For example, although honeybees have a symbolic dance that indicates the distance, direction and quantity of food, this communication system is largely restricted to food despite the intricate social lives of bees. Although meerkat adults teach their pups how to kill scorpion prey by providing them with age-appropriate opportunities for handling and dismembering, teaching does not occur in any other context. Although plovers use a deceptive display to lure predators away from their nest of eggs, they do not deceive in any other situation. And although chimpanzees use the direction of another's eyes to guide strategic competition, they are far less skilled at using another's eyes to guide cooperation. By contrast, in humans, neither language, teaching, deception, or the use of seeing to infer knowing are restricted to a single context.

Posted by Deric Bownds at 5:00 AM
Email ThisBlogThis!Share to TwitterShare to FacebookShare to Pinterest
Blog Categories: evolutionary psychology, human evolution