The gourmet palete - an exercise in hedonistic psychology 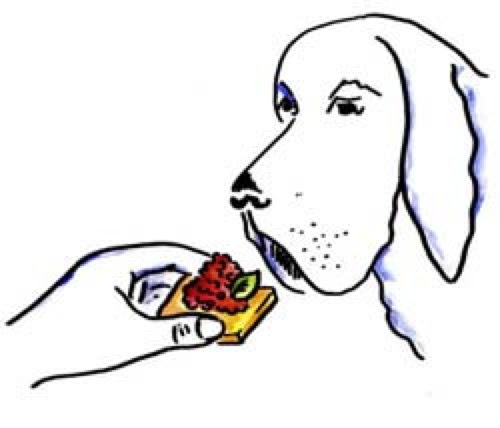 John Bohannon does a humorous piece in the Feb. 20 issue of Science:

What did you do on New Year's Eve? I watched my friends eat dog food. Throughout the last night of 2008, I stood in a makeshift laboratory in the corner of a packed Brooklyn house party. I presented people with bowls of paté--labeled A through E--and a pile of crackers. I explained that four of the bowls contained human food, including expensive luxury patés. One was canned dog food that had been pulsed in a food processor, giving it the same consistency as that of paté. My open-minded friends looked thoughtfully into the middle distance as they munched on mouthfuls of each, jotted down their assessment on data sheets, and then drifted back into the party. As the data rolled in, my eyes grew wide with amazement. Nobody was guessing correctly which was the dog food.

...The five samples covered a wide price range: two expensive liver patés (duck and chicken), two cheap imitation patés (puréed liverwurst and Spam), and the ultimate bargain (dog food). My subjects were hopeless at guessing which paté was dog food. But the answer was literally on the tip of their tongues. Although only one in six people correctly guessed that dish C contained the dog food, almost 75% rated it last in terms of taste. People significantly loathed the dog food (Newell and MacFarlane multiple comparison, p less than 0.1), and that did not correlate with relative sobriety. To cap it off, the average taste rankings of the five spreads exactly matched their relative prices.

Perhaps this result is not surprising, given that numerous blind taste tests involving hundreds of people have shown no correlation between the price of wines costing from $1.50 to $150 and their reported taste.
Posted by Deric Bownds at 5:46 AM
Email ThisBlogThis!Share to TwitterShare to FacebookShare to Pinterest
Blog Categories: attention/perception, culture/politics, psychology