Our genes influence our social networks

Jackson reviews an analysis by Fowler et al. that suggests that genetic traits influence the social behavior of individuals:

...Fowler et al examined the social network characteristics of 1,110 twins from an Adolescent Health Dataset which is based on interviews of high school students. Presuming that the social environment that twins share is not influenced by whether they are monozygotic or dizygotic, if network characteristics are significantly more correlated among monozygotic twins than dizygotic twins then there is evidence for a genetic role in network formation.

The network characteristics that Fowler et al.investigate are: in-degree (how many students name a given student as a friend), out-degree (how many students a given student names as friends), transitivity (if A and B are friends, and B and C are friends, what is the likelihood that A and C are friends), and betweenness centrality (the fraction of shortest paths between other pairs of students that a given student lies on). Their statistical analysis assumes that the variation in a network characteristic can be additively separated into a component that is genetic, a component caused by the environment that would be shared with a twin, and a component caused by the environment that would not be shared with a twin. The covariance between monozygotic twins is then the variance caused by the common environment plus the variance caused by genetic factors, whereas the covariance between dizygotic twins is the variance caused by the common environment plus half of the variance caused by genetic factors. This formulation allows one to solve for the percentage of variation in a given network characteristic that is caused by each of the genetic, common environment, and unshared environment components. The figure shows that almost half of the variation in transitivity and in-degree are genetically attributable, and more than a quarter of betweenness centrality is genetically attributable, but the genetic component of the out-degree variation is too small to be statistically significant. The common environment is statistically insignificant in all cases. (click on figure to enlarge it). 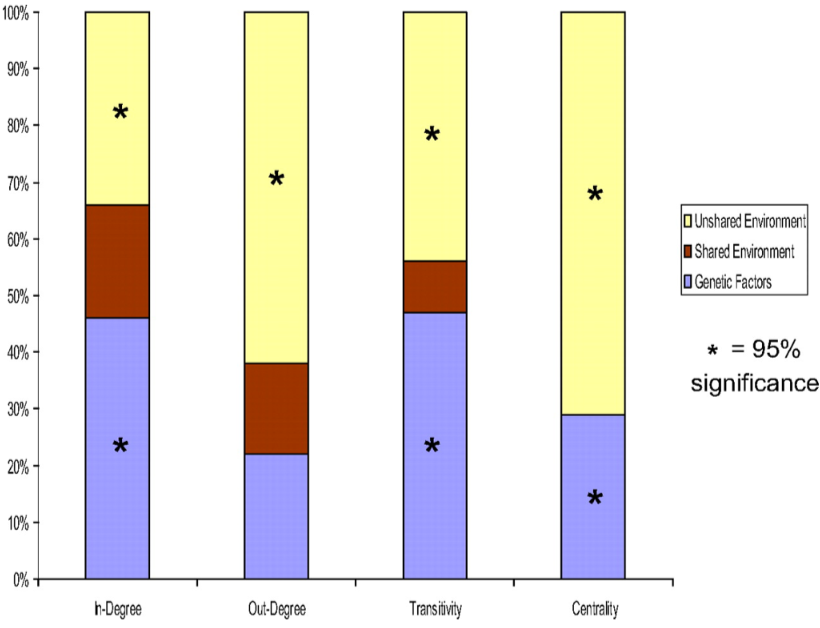 Fowler et al. tried a number of network models to fit with the data and found the only one which generated a relationship between genetics and transitivity was an “Attract and Introduce” model built on two assumptions. First, some individuals are inherently more attractive than others, whether physically or otherwise, so they receive more friendship nominations. Second, some individuals are inherently more inclined to introduce new friends to existing friends (and hence such individuals will indirectly enhance their own transitivity).
Posted by Deric Bownds at 5:30 AM
Email ThisBlogThis!Share to TwitterShare to FacebookShare to Pinterest
Blog Categories: genes, social cognition