Roots of our social glue 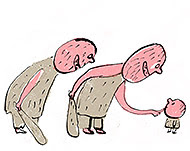 Angier does a nice summary of ideas in Hrdy's forthcoming new book “Mothers and Others: The Evolutionary Origins of Mutual Understanding,” (Harvard Univ. Press):

...the extraordinary social skills of an infant are at the heart of what makes us human. Through its ability to solicit and secure the attentive care not just of its mother but of many others in its sensory purview, a baby promotes many of the behaviors and emotions that we prize in ourselves and that often distinguish us from other animals, including a willingness to share, to cooperate with strangers, to relax one’s guard...Our capacity to cooperate in groups, to empathize with others and to wonder what others are thinking and feeling...probably arose in response to the selective pressures of being in a cooperatively breeding social group, and the need to trust and rely on others and be deemed trustworthy and reliable in turn. Babies became adorable and keen to make connections with every passing adult gaze....mother chimpanzees and gorillas jealously hold on to their infants for the first six months or more of life. Other females may express real interest in the newborn, but the mother does not let go: you never know when one of those females will turn infanticidal, or be unwilling or unable to defend the young ape against an infanticidal male.

Dr. Hrdy wrote her book in part to counter what she sees as the reigning dogma among evolutionary scholars that humans evolved their extreme sociality and cooperative behavior to better compete with other humans. “I’m not comfortable accepting this idea that the origins of hypersociality can be found in warfare, or that in-group amity arose in the interest of out-group enmity,” she said in a telephone interview. Sure, humans have been notably violent and militaristic for the last 12,000 or so years, she said, when hunter-gatherers started settling down and defending territories, and populations started getting seriously dense. But before then? There weren’t enough people around to wage wars. By the latest estimates, the average population size during the hundreds of thousands of years of human evolution that preceded the Neolithic Age may have been around 2,000 breeding adults. “What would humans have been fighting over?” Dr. Hrdy said. “They were too busy trying to keep themselves and their children alive.”

Dr. Hrdy also argues that our human ancestors became emotionally modern long before the human brain had reached its current average volume of 1,300 cubic centimeters, which is about three times the size of a chimpanzee brain — in other words, that we became the nicest apes before becoming the smartest. You don’t need a bulging brain to evolve cooperative breeding. Many species of birds breed cooperatively, as do lions, rats, meerkats, wolves and marmosets, among others. But to become a cooperatively breeding ape, and to persuade a bunch of smart, hot-tempered, suspicious, politically cunning primates to start sharing child care and provisionings, now that took a novel evolutionary development, the advent of this thing called trust.

Posted by Deric Bownds at 5:45 AM
Email ThisBlogThis!Share to TwitterShare to FacebookShare to Pinterest
Blog Categories: evolutionary psychology, human evolution