We are all wired differently - first analysis of a mammalian "connectome" 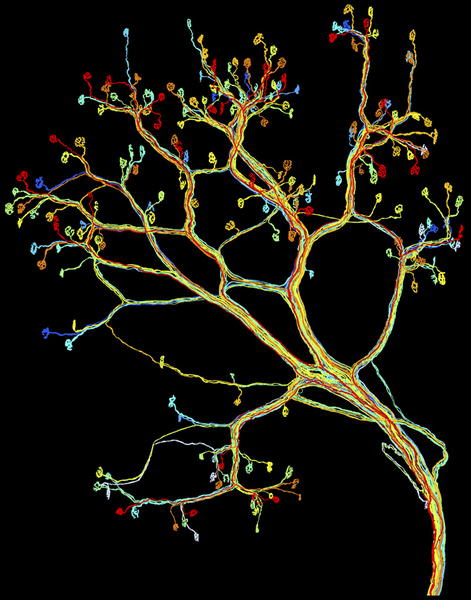 In a striking demonstration, Lu et al have shown that even for one of the smallest muscles in a mouse, the wiring diagram differs between two individuals, and even between the left and right sides of the same mouse. Almost every axon was longer than optimal, breaking a long-held assumption that the total wiring length in a branched axon should be minimized, since the energy costs for conduction increase with length. From Richard Robinson's review:

A complete wiring diagram—where axons go, how they branch, and where they link to muscle—has been developed for roundworms, but never before for a mammal. Performing the same feat in the mouse has presented an enormous technical challenge because of the larger size and complexity of the nervous system. The authors chose to study the interscutularis muscle, which connects the base of the ear to the middle of the skull, because it was small, accessible, and innervated by relatively few neurons...Using mice whose cells all bore a fluorescent tag, and a confocal microscope with a computer-controlled, motorized stage, the authors took thousands of individual photographs and reconstructed them to trace individual axons as they stretched across the skull, entered the muscle, branched repeatedly, and ultimately formed synapses with individual muscle fibers.

In the worm, the routes taken and connections made by axons are highly stereotyped, indicating a high degree of genetic control. But in the mouse, the actual number of axons innervating a single muscle ranged from 13 to 16, differing between mice and even between the left and right sides of the same mouse. Axonal length, including all the branches, varied much more widely, from 1.5 millimeters to 13.3 millimeters, and the number of synapses formed by a single axon ranged from a low of one (for an axon that didn't branch at all) to a high of 37. The branching pattern of axons that innervate a similar number of muscle fibers from different muscles also differed significantly, suggesting that unlike in the worm, branching in the mammal is not a deterministic process; instead it is governed by some general developmental rules, while the details of final connection are shaped by contingencies, as excess synapses are pruned.

Posted by Deric Bownds at 5:15 AM
Email ThisBlogThis!Share to TwitterShare to FacebookShare to Pinterest
Blog Categories: brain plasticity, human development