Erasing fear responses and preventing the return of fear.

Kindt et al. demonstrate an interesting effect of a beta-blocker that one thinks might become part of clinical practice soon. They found that a conditioned fear response can be weakened by disrupting the reconsolidation of the fear memory with propranolol and that this disruption prevents the return of fear. While Propranolol disrupts the reconsolidation of the fear memory, it does not disrupt declarative memory (recall of the facts of the fear inducing event). The abstract:

Animal studies have shown that fear memories can change when recalled, a process referred to as reconsolidation. We found that oral administration of the

-adrenergic receptor antagonist propranolol before memory reactivation in humans erased the behavioral expression of the fear memory 24 h later and prevented the return of fear. Disrupting the reconsolidation of fear memory opens up new avenues for providing a long-term cure for patients with emotional disorders.

The conditioned fear response was measured as potentiation of the eyeblink startle reflex to a loud noise (40 ms, 104 dB) by electromyography of the right orbicularis oculi muscle. Stronger startle responses to the loud noise during the fear-conditioned stimulus (CS1+) as compared with the control stimulus (CS2-) reflects the fearful state of the participant elicited by CS1+. Startle potentiation taps directly into the amygdala, and fear-conditioning procedures yield highly reliable and robust startle potentiation. 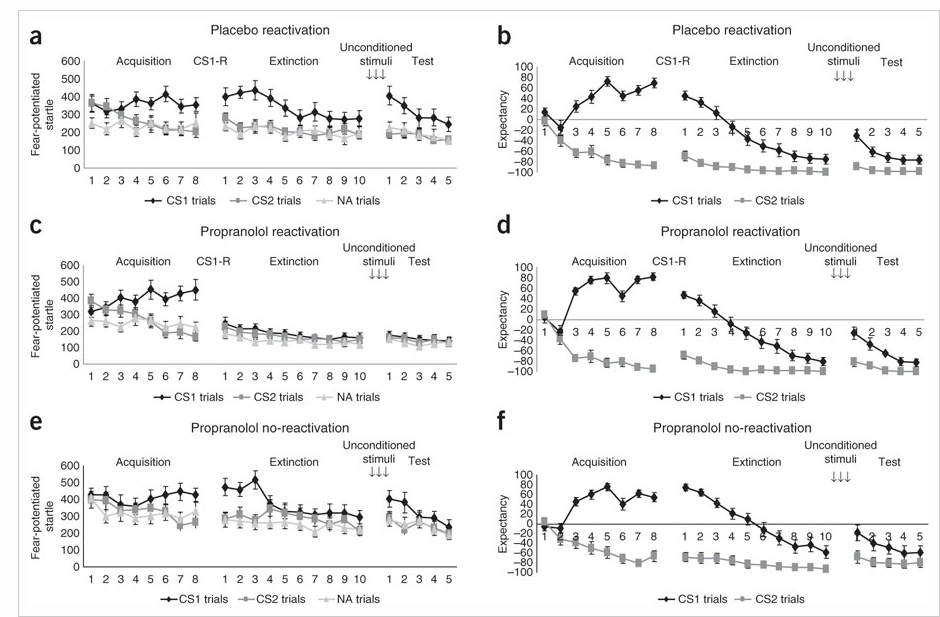 Posted by Deric Bownds at 5:50 AM
Email ThisBlogThis!Share to TwitterShare to FacebookShare to Pinterest
Blog Categories: fear/anxiety/stress, memory/learning