The social brain in adolescence - a review

In a recent Nature Reviews Neuroscience, Sarah-Jayne Blakemore does a summary of changes in the social brain during adolescence and I put down here the slightly edited capsule summary and one summary figure that offers a review of the relevant brain structures:

The 'social brain', the network of brain regions involved in understanding other people, includes the medial prefrontal cortex (mPFC) and the posterior superior temporal sulcus (pSTS). These regions are key to the process of mentalizing — that is, the attribution of mental states to oneself and to other people...Recent functional neuroimaging studies have shown that activity in parts of the social brain during social cognitive tasks changes during adolescence... activity in the PFC during face-processing tasks increases from childhood to adolescence and then decreases from adolescence to adulthood. Consistent with this, activity in the mPFC during mentalizing tasks decreases between adolescence and adulthood. 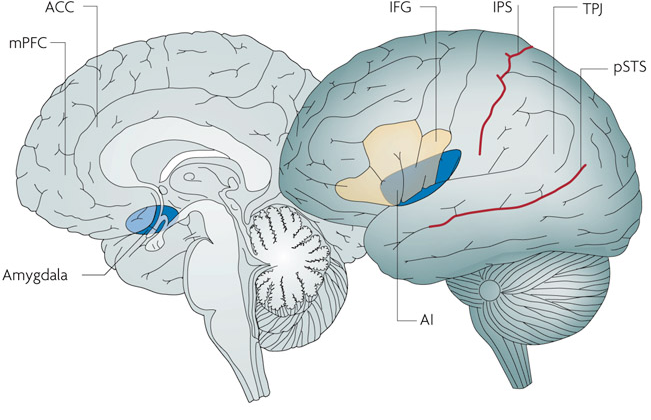 Figure - Regions that are involved in social cognition include the medial prefrontal cortex (mPFC) and the temporoparietal junction (TPJ), which are involved in thinking about mental states, and the posterior superior temporal sulcus (pSTS), which is activated by observing faces and biological motion. Other regions of the social brain on the lateral surface are the inferior frontal gyrus (IFG) and the interparietal sulcus (IPS). Regions on the medial surface that are involved in social cognition include the amygdala, the anterior cingulate cortex (ACC) and the anterior insula (AI).

Posted by Deric Bownds at 8:00 AM
Email ThisBlogThis!Share to TwitterShare to FacebookShare to Pinterest
Blog Categories: human development, social cognition