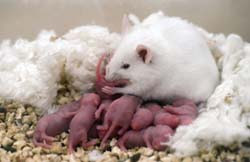 From the laboratory of my Univ. of Wisconsin Zoology colleague Steve Gammie, along with Anthony Auger in the Psychology Department, an interesting account of a mouse model for human maternal neglect: a strain of mice that exhibit unusually high rates of maternal neglect, with approximately one out of every five females failing to care for her offspring. By comparing the good mothers to their less attentive relatives, this group has found that negligent parenting seems to have both genetic and non-genetic influences, and may be linked to dysregulation of the brain signaling chemical dopamine. In more detail, they:

...examined brain activity in neglectful and nurturing mice. c-Fos expression was significantly elevated in neglectful relative to nurturing mothers in the CNS, particularly within dopamine associated areas, such as the zona incerta (ZI), ventral tegmental area (VTA), and nucleus accumbens. Phosphorylated tyrosine hydroxylase (a marker for dopamine production) was significantly elevated in ZI and higher in VTA (although not significantly) in neglectful mice. Tyrosine hydroxylase levels were unaltered, suggesting a dysregulation of dopamine activity rather than cell number. Phosphorylation of DARPP-32, a marker for dopamine D1-like receptor activation, was elevated within nucleus accumbens and caudate-putamen in neglectful versus nurturing dams.

Posted by Deric Bownds at 6:30 AM
Email ThisBlogThis!Share to TwitterShare to FacebookShare to Pinterest
Blog Categories: animal behavior, genes