Most work on brain changes with aging has focused on individual regions, especially those in the frontal lobe, which may shrink or lose activity even in the absence of disease. Andrews-Hanna et al. offer an important paper showing how long range interactions between brain regions are compromised with aging. The work looked at neural activity during a task in two large-scale networks that span the brain: the default network, used when we’re worrying, thinking of the past and future, or imagining people in our lives; and the attention network, used when we’re focusing on a specific task, such as word processing or math problems. The brain regions making up these systems were in sync in young people, but much less so, or not at all, in people over 60. 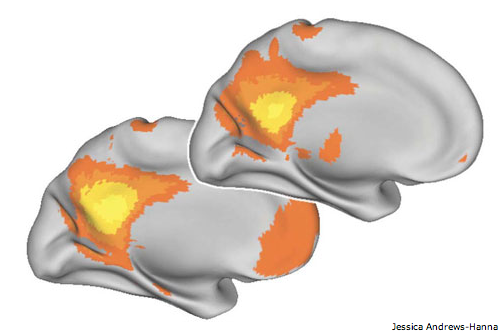 Figure - the younger brain, below, shows more synchronized activity than the older brain, above.

Posted by Deric Bownds at 7:15 AM
Email ThisBlogThis!Share to TwitterShare to FacebookShare to Pinterest
Blog Categories: aging