Until recent experiments showing that scrub jays remember where and when they cached or discovered foods of differing palatability, it had been thought that episodic memory - defined as ability to remember an event (what) as well as where and when it happened - was confined to humans. Memory for 'when' observed in scrub jays has been taken to suggest that animals can mentally travel in time or locate a past event within a temporal framework of hours and days. Roberts et al. point out that:

An alternative possibility is that, instead of remembering when an event happened within a framework of past time, animals are keeping track of how much time has elapsed since caching or encountering a particular food item at a particular place and are using elapsed time to indicate return to or avoidance of that location. The cues of when and how long ago are typically confounded in studies of episodic-like memory. Thus, animals might be remembering how long ago an event occurred by keeping track of elapsed time using accumulators, circadian timers, their own behavior, or the strength of a decaying memory trace. If this is the case, then episodic-like memory in animals may be quite different from human episodic memory in which people can reconstruct past experiences within an absolute temporal dimension.

Their experiments show that this is the case. 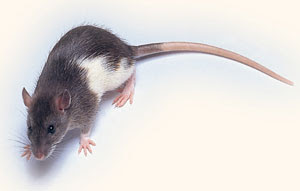 Three groups of Long-Evans hooded rats were tested for memory of previously encountered food. The different groups could use only the cues of when, how long ago, or when + how long ago. Only the cue of how long ago food was encountered was used successfully. These results suggest that episodic-like memory in rats is qualitatively different from human episodic memory.

Posted by Deric Bownds at 7:00 AM
Email ThisBlogThis!Share to TwitterShare to FacebookShare to Pinterest
Blog Categories: animal behavior, memory/learning