The 'size' of an odor can influence our reaching to grasp an object. 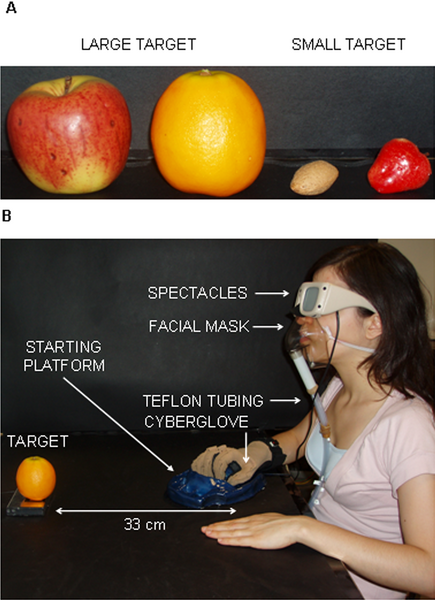 An nice example from Tubaldi et al. of multisensory integration. They find that olfactory information contains highly detailed information able to elicit the planning for a reach-to-grasp movement suited to interact with the evoked object. From their paper:

The size of the object evoked by the odour has the potential to modulate hand shaping. Importantly, the fact that ‘size’ olfactory information modulates the hand at the level of individual digits (and not only the thumb-index distance as previously reported) leads to two important considerations in terms of sensorimotor transformation. First, from a perceptual perspective, the representation evoked by the odour seems to contain highly detailed information about the object (i.e., volumetric features rather than a linear dimension such as the thumb-index distance). If olfaction had provided a blurred and holistic object's representation (i.e., a low spatial-resolution of the object's image), then the odour would have not affected the hand in its entirety. Second, from a motor perspective, the olfactory representation seems to be mapped into the action vocabulary with a certain degree of reliability. The elicited motor plan embodies specific and selective commands for handling the ‘smelled’ object, and it is fully manageable by the motor system. Therefore, it is not an incomplete primal sketch which only provides a preliminary descriptive in the terms of motor execution.

Some of the details:

When the odour was ‘large’ and the visual target was small, only one finger joint (i.e., the mcp joint of the ring finger) was affected by the olfactory stimulus. In contrast, the influence of the ‘small’ odour on the kinematics of a reach-to-grasp movement towards a large target was much more evident and a greater number of joints were mobilized. This seems to suggest that planning for a reach-to-grasp movement on the basis of a ‘small’ odour when the target is large poses more constraints than when the odour is ‘large’ and the movement is directed towards a small target. Our proposal is that the motor plan elicited by the odour has to be modified according to the visual target. However such reorganization could be more easily managed without compromising object grasp when the odour is ‘large’ and the visual target is small than vice versa.

When a preceding odour elicits a motor plan which is congruent with the motor plan subsequently established for the visual target, the kinematic patterning is magnified. Therefore, the grasp plan triggered by the olfactory stimulus primed the grasp plan established for the visual target. This effect was evident at the very beginning of the movement, fading away during the second phase of the movement. For both the incongruent conditions the conflict between the ‘olfactory’ and the ‘visual’ grasp plans lasted for the entire movement duration. Importantly, and again in contrast with what reported for the incongruent conditions, an odour of a similar ‘size’ than the visual target, does not alter hand synergies with respect to when no-odour is presented. This indicates that when the ‘size’ of the odour and the size of the visual target match, the integration of the two modalities reinforces the grasp plan, the established synergic pattern is more ‘protected’ and it does not change. Having two sources carrying similar information leads to a more stable and coherent action.

Posted by Deric Bownds at 6:30 AM
Email ThisBlogThis!Share to TwitterShare to FacebookShare to Pinterest
Blog Categories: acting/choosing, attention/perception