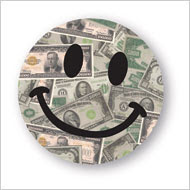 In the Business section of the NY Times, Leonhardt points to a recent article by Betsey Stevenson and Justin Wolfers that disagrees with a classic paper published by Richard Easterlin in 1974, in which he argued that economic growth didn’t necessarily lead to more satisfaction. The prevailing idea as been that once a basic level of subsistence has been reached people care more about how much they make with respect to those around them than they do about their absolute level of income. An 'aspiration treadmill' makes people continuously dissatisfied (You own an iPod, now you want an iPod touch). Better public opinion data has been obtained over the past 34 years, and the bottom line is that income does matter, money indeed tends to bring happiness, even if it doesn’t guarantee it.

If anything...absolute income seems to matter more than relative income. In the United States, about 90 percent of people in households making at least $250,000 a year called themselves “very happy” in a recent Gallup Poll. In households with income below $30,000, only 42 percent of people gave that answer. But the international polling data suggests that the under-$30,000 crowd might not be happier if they lived in a poorer country.

Here is a summary graphic from Leonhardt's article (click to enlarge): 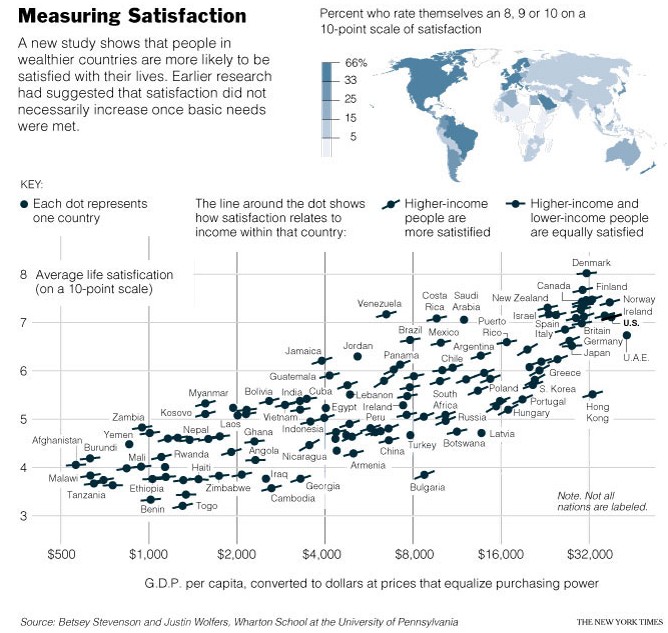 Posted by Deric Bownds at 7:00 AM
Email ThisBlogThis!Share to TwitterShare to FacebookShare to Pinterest
Blog Categories: happiness