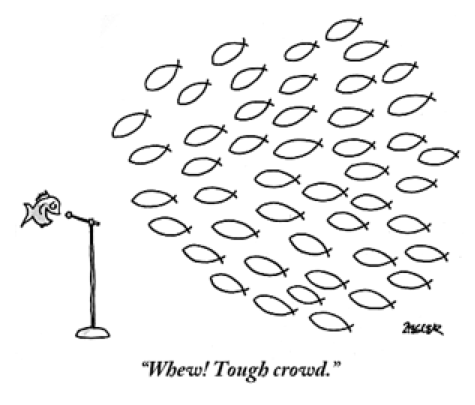 John Cassidy, in an interesting article in The New Yorker, discusses the inner logic of an economy like ours, in which behavior that is perfectly reasonable on the individual level produces calamity when aggregated in the marketplace. During both rises and falls in the markets, very small perturbations can be magnified by interlocking feedback loops that cause the economy to balloon into either a bubble or a crash.

Calvin Trillin, in a humorous but dead-on piece, has a much more simple model for the meltdown. Wall Street used to be run by the bottom third of the college class, the people who took gut general education courses (such as the Geology course referred to as "Rocks for Jocks"), and they weren't smart enough to invent all these fancy derivative investment vehicles. Then the upper third of the class that used to become teachers, doctors, or lawyers decided they needed to make more money. Mathematicians and physicists poured in to investment houses and invented all the complicated and sophisticated schemes that brought down the system.
Posted by Deric Bownds at 5:30 AM
Email ThisBlogThis!Share to TwitterShare to FacebookShare to Pinterest
Blog Categories: culture/politics