The Fat and Short of It 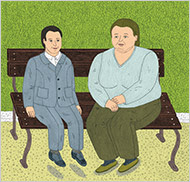 Engber writes a brief article on the fact that not only are there correlations between excess fat and health risk, but also shorter height correlates with increased coronary heart disease, diabetes or stroke. Also,

In the labor market, the effects of height and weight tend to run in parallel. A 2004 study by John Cawley of Cornell University found that severely obese white women who weigh more than two standard deviations above average — women who weigh, for example, more than 212 pounds if they’re 5 feet 4 inches tall — are paid up to 9 percent less for their work. Likewise, a decrease in a man’s height to the 25th percentile from the 75th — roughly to 5 feet 8 inches from 6 feet— is associated with, on average, a dip in earnings of 6 to 10 percent...And like obese people, short people are less likely to finish college than those of average weight. A paper from the July issue of the journal Economics and Human Biology used survey data from more than 450,000 adults to conclude that male college graduates are, on average, more than an inch taller than men who never finished high school.

Posted by Deric Bownds at 5:30 AM
Email ThisBlogThis!Share to TwitterShare to FacebookShare to Pinterest
Blog Categories: culture/politics, human development