How our brain's hard wiring is hooked by texting, twitter, email, googling... 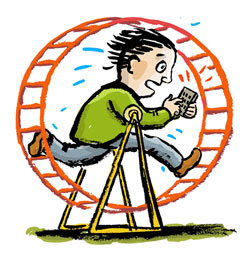 As a companion to the previous post on distinguishing 'wanting' and 'liking' I would like to point you to an engaging article in Slate by Emily Yoffe (thanks to my son Jon for pointing it out to me). She discusses the work from researchers like Jaak Panksepp and Kent Berridge (the subjects of several mindblog posts over the past few years) that suggests the biological basis of our addiction to email, google, twitter, texting, etc.

The juice that fuels the seeking system is the neurotransmitter dopamine. The dopamine circuits "promote states of eagerness and directed purpose," Panksepp writes. It's a state humans love to be in. So good does it feel that we seek out activities, or substances, that keep this system aroused—cocaine and amphetamines, drugs of stimulation, are particularly effective at stirring it.

Ever find yourself sitting down at the computer just for a second to find out what other movie you saw that actress in, only to look up and realize the search has led to an hour of Googling? Thank dopamine. Our internal sense of time is believed to be controlled by the dopamine system. People with hyperactivity disorder have a shortage of dopamine in their brains, which a recent study suggests may be at the root of the problem. For them even small stretches of time seem to drag. An article by Nicholas Carr in the Atlantic last year, "Is Google Making Us Stupid?" speculates that our constant Internet scrolling is remodeling our brains to make it nearly impossible for us to give sustained attention to a long piece of writing. Like the lab rats, we keep hitting "enter" to get our next fix.

Wanting is Berridge's equivalent for Panksepp's seeking system. It is the liking system that Berridge believes is the brain's reward center. When we experience pleasure, it is our own opioid system, rather than our dopamine system, that is being stimulated. This is why the opiate drugs induce a kind of blissful stupor so different from the animating effect of cocaine and amphetamines. Wanting and liking are complementary. The former catalyzes us to action; the latter brings us to a satisfied pause. Seeking needs to be turned off, if even for a little while, so that the system does not run in an endless loop. When we get the object of our desire (be it a Twinkie or a sexual partner), we engage in consummatory acts that Panksepp says reduce arousal in the brain and temporarily, at least, inhibit our urge to seek.

But our brains are designed to more easily be stimulated than satisfied. "The brain seems to be more stingy with mechanisms for pleasure than for desire," Berridge has said. This makes evolutionary sense. Creatures that lack motivation, that find it easy to slip into oblivious rapture, are likely to lead short (if happy) lives. So nature imbued us with an unquenchable drive to discover, to explore. Stanford University neuroscientist Brian Knutson has been putting people in MRI scanners and looking inside their brains as they play an investing game. He has consistently found that the pictures inside our skulls show that the possibility of a payoff is much more stimulating than actually getting one.

Actually all our electronic communication devices—e-mail, Facebook feeds, texts, Twitter—are feeding the same drive as our searches. Since we're restless, easily bored creatures, our gadgets give us in abundance qualities the seeking/wanting system finds particularly exciting. Novelty is one. Panksepp says the dopamine system is activated by finding something unexpected or by the anticipation of something new. If the rewards come unpredictably—as e-mail, texts, updates do—we get even more carried away. No wonder we call it a "CrackBerry."

Posted by Deric Bownds at 5:40 AM
Email ThisBlogThis!Share to TwitterShare to FacebookShare to Pinterest
Blog Categories: motivation/reward