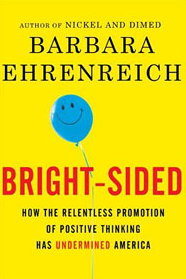 Patricia Cohen offers a review of Barbara Ehrenreich's new book “Bright-sided: How the Relentless Promotion of Positive Thinking Has Undermined America,” which takes on the happiness movement, in particular its more extreme proponents. The book, despite its title, it is not a curmudgeonly rant. Ehrenreich found in 2000 that she had breast cancer. The book chronicles:

...her stay in a world that she became intimately familiar with: the smiley-faced, pink-ribboned, positive-thinking culture that surrounds breast cancer patients...The unrelenting message was “that you had to be cheerful and accepting and that you would not recover unless you were...It’s a clever blame-the-victim sort of thing.”

Then the financial crisis hit. “Wham,” she said. “It was so clear to me that it was connected.” The relentlessly optimistic forecasts about subprime mortgages and endless increases in real estate values were the product of the positive-thinking culture. One of the fundamental tenets of the literature, Ms. Ehrenreich said, is to surround yourself with other positive thinkers and “get rid of negative people...
We’ve been weeding out anybody capable of rational thinking, of realism.”

In “Bright-sided,” she traces the roots of the nation’s blithe sunniness to a reaction against Calvinist gloom and the limits of medical science in the first half of the 19th century. Starting with Phineas Parkhurst Quimby, perhaps one of the first American New Age faith healers, she draws a line to Mary Baker Eddy, the founder of Christian Science; the psychologist William James; Ralph Waldo Emerson; Norman Vincent Peale, who published “The Power of Positive Thinking” in 1952; and the toothy television minister Joel Osteen, who preaches the gospel of prosperity...To Ms. Ehrenreich, the reliance on one’s personal disposition shifts attention from the larger social, political and economic forces behind poverty, unemployment and poor health care. “It can’t all be fixed by assertiveness training...All that shiny optimism, she said, was “like sitting in a warm bubble bath for too long.”

Posted by Deric Bownds at 5:30 AM
Email ThisBlogThis!Share to TwitterShare to FacebookShare to Pinterest
Blog Categories: happiness