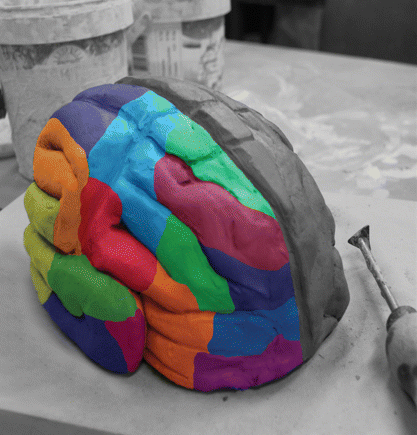 Lewis et al. have demonstrated that learning an attention-demanding visual task modifies the spontaneous correlation of activity in the resting human brain - suggesting that the functional architecture of the brain is partly a product of previous experience. At left is a clay model representation of the human brain provided by Lewis, colored to indicate putative areas in frontal, temporal, and parietal cortex changed by a task. The abstract:

The brain is not a passive sensory-motor analyzer driven by environmental stimuli, but actively maintains ongoing representations that may be involved in the coding of expected sensory stimuli, prospective motor responses, and prior experience. Spontaneous cortical activity has been proposed to play an important part in maintaining these ongoing, internal representations, although its functional role is not well understood. One spontaneous signal being intensely investigated in the human brain is the interregional temporal correlation of the blood-oxygen level-dependent (BOLD) signal recorded at rest by functional MRI (functional connectivity-by-MRI, fcMRI, or BOLD connectivity). This signal is intrinsic and coherent within a number of distributed networks whose topography closely resembles that of functional networks recruited during tasks. While it is apparent that fcMRI networks reflect anatomical connectivity, it is less clear whether they have any dynamic functional importance. Here, we demonstrate that visual perceptual learning, an example of adult neural plasticity, modifies the resting covariance structure of spontaneous activity between networks engaged by the task. Specifically, after intense training on a shape-identification task constrained to one visual quadrant, resting BOLD functional connectivity and directed mutual interaction between trained visual cortex and frontal-parietal areas involved in the control of spatial attention were significantly modified. Critically, these changes correlated with the degree of perceptual learning. We conclude that functional connectivity serves a dynamic role in brain function, supporting the consolidation of previous experience.

Posted by Deric Bownds at 5:35 AM
Email ThisBlogThis!Share to TwitterShare to FacebookShare to Pinterest
Blog Categories: memory/learning