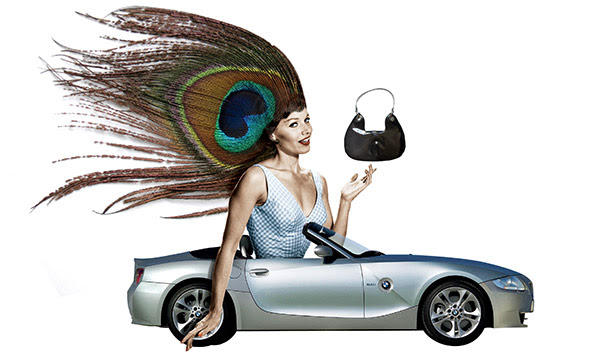 Tierney describes how Geoffrey Miller continues the arguments he started in "The Mating Mind" which seek to reduce much of our behavior to a quest for sex and status. His new book is “Spent: Sex, Evolution and Consumer Behavior.” This is a complementary approach to the sort of material mentioned in Monday's post on Gopnik's article.

If marketers (or their customers) understood biologists’ new calculations about animals’ “costly signaling,” ... they’d see that Harvard diplomas and iPhones send the same kind of signal as the ornate tail of a peacock....Sometimes the message is as simple as “I’ve got resources to burn,” the classic conspicuous waste demonstrated by the energy expended to lift a peacock’s tail or the fuel guzzled by a Hummer. But brand-name products aren’t just about flaunting transient wealth. The audience for our signals — prospective mates, friends, rivals — care more about the permanent traits measured in tests of intelligence and personality.

In a series of experiments, Dr. Miller and other researchers found that people were more likely to expend money and effort on products and activities if they were first primed with photographs of the opposite sex or stories about dating...After this priming, men were more willing to splurge on designer sunglasses, expensive watches and European vacations. Women became more willing to do volunteer work and perform other acts of conspicuous charity — a signal of high conscientiousness and agreeableness, like demonstrating your concern for third world farmers by spending extra for Starbucks’s “fair trade” coffee.

To get over your consuming obsessions, Dr. Miller suggests exercises like comparing the relative costs and pleasures of the stuff you’ve bought. (You can try the exercise at nytimes.com/tierneylab.) It may seem odd that we need these exercises — why would natural selection leave us with such unproductive fetishes? — perhaps because evolution is good at getting us to avoid death, desperation and celibacy, but not that good at getting us to feel happy...our desire to impress strangers may be a quirky evolutionary byproduct of a smaller social world...“We evolved as social primates who hardly ever encountered strangers in prehistory,” Miller says. “So we instinctively treat all strangers as if they’re potential mates or friends or enemies. But your happiness and survival today don’t depend on your relationships with strangers. It doesn’t matter whether you get a nanosecond of deference from a shopkeeper or a stranger in an airport.”