Antonio and Hanna Damasio and collaborators have now observed brain activities associated with our internal loftier emotions that transcend self-interest, such as elevation and admiration. These are hard to measure because they don't correlate obviously with facial expressions or body language. Haidt and Morris, in their commentary in the same issue of PNAS, set the context for the work:

Emotion research has something in common with a drunk searching for his car keys under a street lamp. ‘‘Where did you lose them?’’ asks the cop. ‘‘In the alley,’’ says the drunk, ‘‘but the light is so much better over here.’’ For emotion research, the light shines most brightly on the face, whose movements can be coded, compared across cultures, and quantified by electromyography. All of the ‘‘basic’’ emotions described by Paul Ekman and others (happiness, sadness, anger, fear, surprise, and disgust) earned their place on the list by being face-valid. The second source of illumination has long been animal research. Emotions that can be reliably triggered in rats, such as fear and anger, have been well-studied, down to specific pathways through the amygdala. But emotions that cannot be found on the face or in a rat, such as moral elevation and admiration, are largely abandoned back in the alley. We know they are there, but nobody can seem to find a flashlight. It is therefore quite an achievement that Immordino-Yang, McCall, Damasio, and Damasio managed to drag an fMRI scanner back there and have given us a first glimpse of the neurological underpinnings of elevation and admiration.

Here is the abstract and a figure from the paper:

In an fMRI experiment, participants were exposed to narratives based on true stories designed to evoke admiration and compassion in 4 distinct categories: admiration for virtue (AV), admiration for skill (AS), compassion for social/psychological pain (CSP), and compassion for physical pain (CPP). The goal was to test hypotheses about recruitment of homeostatic, somatosensory, and consciousness-related neural systems during the processing of pain-related (compassion) and non-pain-related (admiration) social emotions along 2 dimensions: emotions about other peoples' social/psychological conditions (AV, CSP) and emotions about others' physical conditions (AS, CPP). Consistent with theoretical accounts, the experience of all 4 emotions engaged brain regions involved in interoceptive representation and homeostatic regulation, including anterior insula, anterior cingulate, hypothalamus, and mesencephalon. However, the study also revealed a previously undescribed pattern within the posteromedial cortices (the ensemble of precuneus, posterior cingulate cortex, and retrosplenial region), an intriguing territory currently known for its involvement in the default mode of brain operation and in self-related/consciousness processes: emotions pertaining to social/psychological and physical situations engaged different networks aligned, respectively, with interoceptive and exteroceptive neural systems. Finally, within the anterior insula, activity correlated with AV and CSP peaked later and was more sustained than that associated with CPP. Our findings contribute insights on the functions of the posteromedial cortices and on the recruitment of the anterior insula in social emotions concerned with physical versus psychological pain. 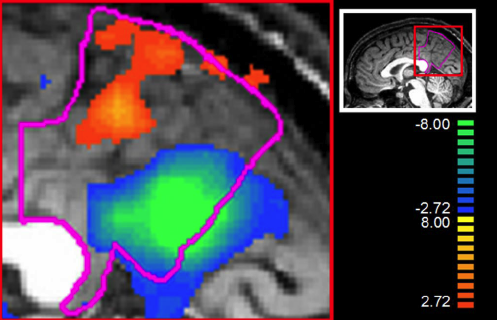 Figure (click to enlarge). Relative activation in the posteromedial cortices (PMC, outlined in pink) for admiration for virtue and compassion for social pain (AV/CSP, blue3 green) versus admiration for skill and compassion for physical pain (AS/CPP, orange 3 yellow). The image is thresholded at q(FDR)  0.05. The bar to the right provides a color code for t statistics associated with the contrast. The red box frames the location of the magnified view. Note the clear separation between the anterosuperior sector activated by AS/CPP, and the posteroinferior activated by AV/CSP.

Posted by Deric Bownds at 5:31 AM
Email ThisBlogThis!Share to TwitterShare to FacebookShare to Pinterest
Blog Categories: happiness, morality, social cognition