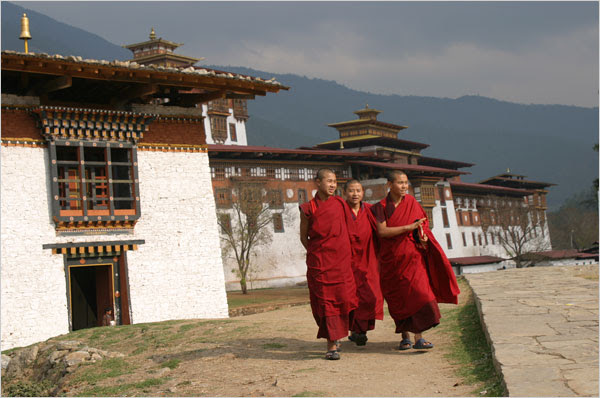 Seth Mydans describes how the tiny Himalayan kingdom of Bhutan (population ~700,000) is making an effort to replace GNP (gross national product) with GNH (gross national happiness) as the most meaningful indicator of a nation's health. After the World Bank and the I.M.F. essentially said OK.......but how do you measure it?, the government devised an intricate model of well-being, that in true Buddhist form, gets into huge lists and sub-lists: the four pillars, nine domains, and 72 indicators of happiness.

Gross national happiness has a broader application for Bhutan as it races to preserve its identity and culture from the encroachments of the outside world...Bhutan is pitting its four pillars, nine domains and 72 indicators against the 48 channels of Hollywood and Bollywood that have invaded since television was permitted a decade ago...Before June 1999 if you asked any young person who is your hero, the inevitable response was, ‘The king,’ Immediately after that it was David Beckham, and now it’s 50 Cent, the rap artist. Parents are helpless...So if G.N.H. may hold the secret of happiness for people suffering from the collapse of financial institutions abroad, it offers something more urgent here in this pristine culture.

Posted by Deric Bownds at 5:45 AM
Email ThisBlogThis!Share to TwitterShare to FacebookShare to Pinterest
Blog Categories: happiness