Some clips from a recent article from Daniel Gilbert and collaborators (Gilbert is the guy who wrote "Stumbling on Happiness" that I abstracted several years ago on this blog):

...during his 2007 trial, Vice-Presidential Chief of Staff I. Lewis "Scooter" Libby claimed that he could not remember mentioning the identity of a Central Intelligence Agency employee to other government officials or reporters. Jurors found it difficult to believe that Libby could have forgotten having had such important conversations and found him guilty of obstruction of justice, making false statements, and perjury
...Libby's conversations were indeed important, but they were less important at the time he had them than they became months later when the Justice Department launched its investigation. Although important information increases the motivation to remember (MTR), research on human memory suggests that MTR is considerably more effective when it arises before rather than after information is encoded...Do people take the timing of MTR into account when judging other people's memories?

Here is the experimental design:

The results, shown in this figure, were extremely clear: 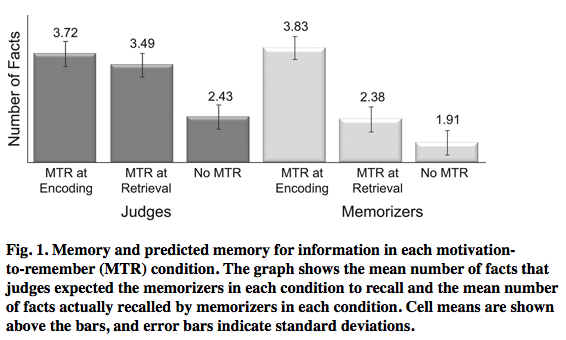 Participants who were asked to judge another individual's memory did not distinguish between information that was important when the individual encountered it and information that became important only later. Clearly, people's theories about the effects of motivation on memory are imperfect. It is interesting to note, in light of these findings, that the U.S. District Court denied Libby's motion to allow expert psychologists to testify about the foibles of memory and metamemory because, the court argued, such research would tell jurors little that they did not already know.

Posted by Deric Bownds at 5:40 AM
Email ThisBlogThis!Share to TwitterShare to FacebookShare to Pinterest
Blog Categories: memory/learning