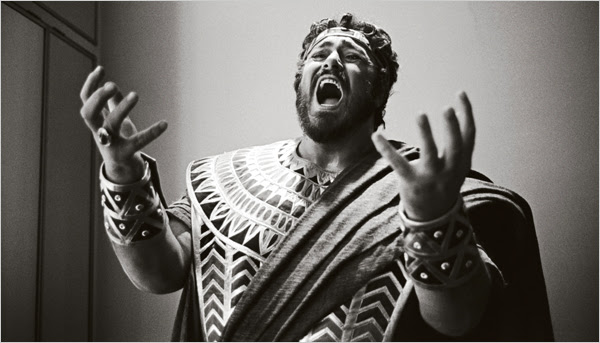 I'm an opera buff, and can be reduced to a puddle by beautiful singing. Thus I pass on some clips from an essay by Daniel Wakin (PDF here) on the passing of Luciano Pavarotti, regarded as the king of the High C's:

His voice, especially earlier in his career, was remarkable across its range. But that little note, an octave above middle C on the piano, played a role in projecting Mr. Pavarotti’s fame around the world. That is no surprise. The tenor high C has a long and noble tradition, and a healthy dose of mystique...Tenor high C’s are scattered throughout the opera literature. Sometimes tenors transpose the aria down slightly or drop an octave, other times they fake it and edge into falsetto voice, where it is easier to sing. Just as often, they hit it, and hold it, and that moment is one of the most exciting in an opera house. It is moments like those when opera, in addition to the aesthetic joys and emotional satisfactions, can seem like a spectator sport or a circus high-wire act. They’re times when opera audiences cheer or jeer.

But the high C has a more visceral, spine-tingling lure...“The reason it’s so exciting to people is, it’s based on the human cry,” said Maitland Peters, chairman of the voice department at the Manhattan School of Music. “It’s instinctual. It’s like a baby. You’re pulled into it.” When a tenor sings a ringing high C, it seems, “there’s nothing in his way,” Mr. Peters said...The pitch, in itself, has a satisfying quality. The key of C major, after all, is a stable, cheerful, happy key, the one with no sharps or flats.

Posted by Deric Bownds at 6:40 AM
Email ThisBlogThis!Share to TwitterShare to FacebookShare to Pinterest
Blog Categories: culture/politics, deric, music